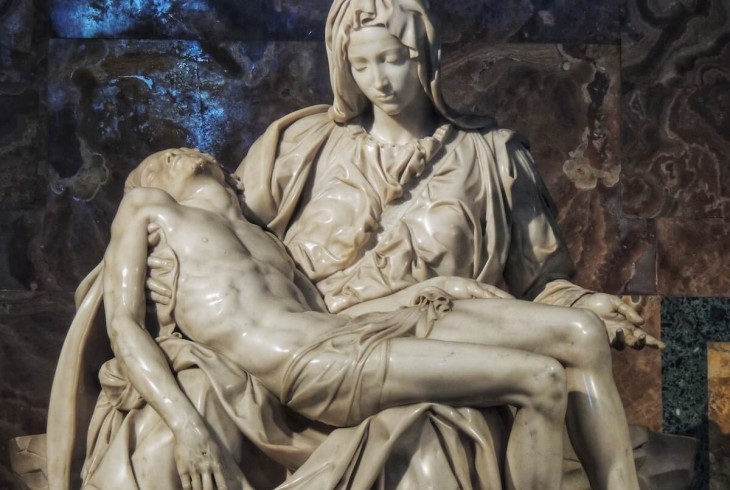 To celebrate the launch of our in-depth two part virtual exploration of St. Peter’s Basilica, this week on our blog we’re examining in detail what is perhaps the magnificent church’s absolute masterpiece: Michelangelo’s extraordinarily touching Pietà, carved on the sculptor’s first Roman sojourn when he was in his early 20s. Despite a career that would span a further 60 years and countless more masterpieces, Michelangelo would perhaps never surpass his first great work.

Michelangelo in the Eternal City: all roads lead to Rome 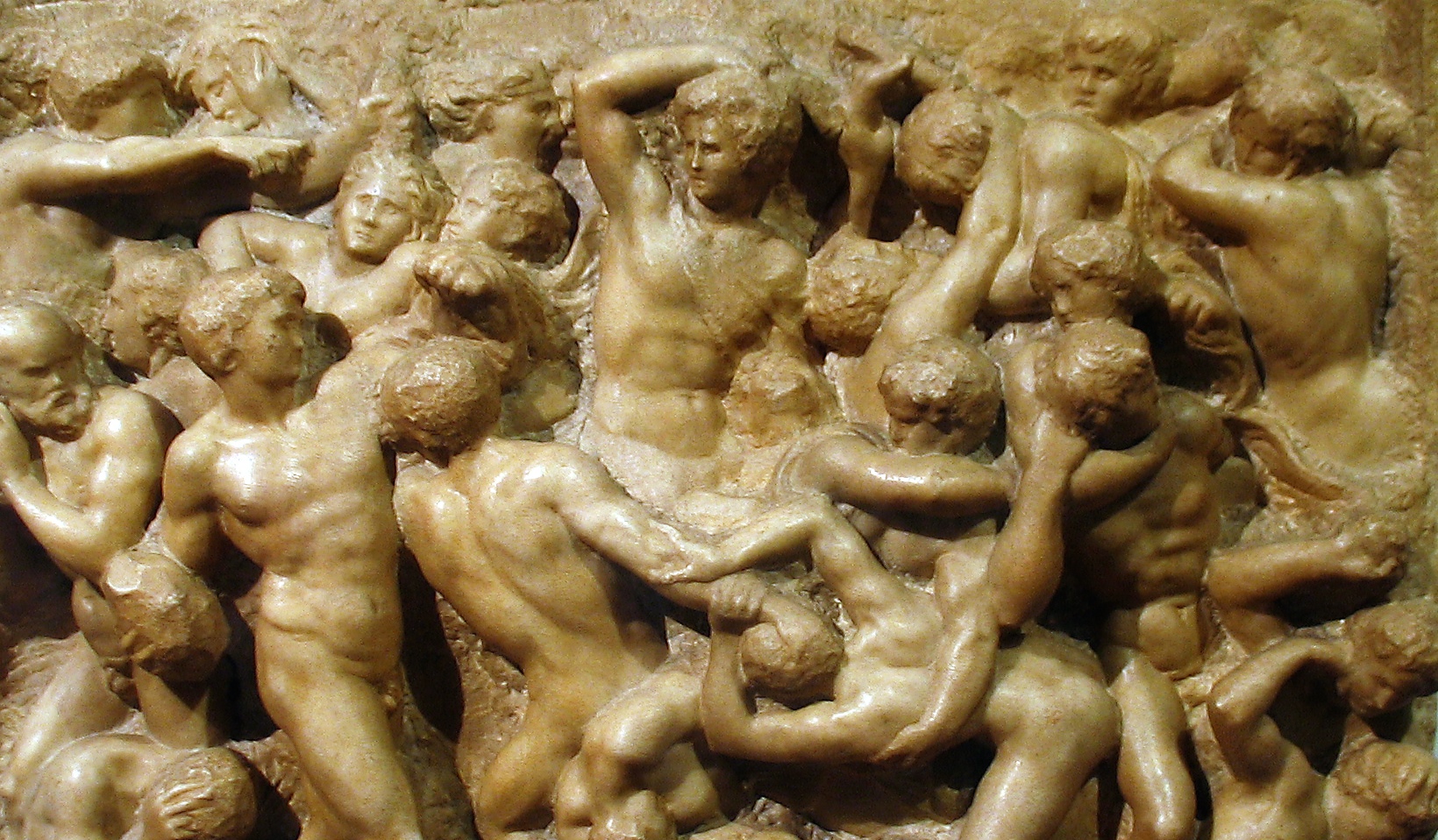 By the time Michelangelo arrived in Rome as a callow youth of 22 in 1496, he had already achieved some renown in his native Florence. A favourite of the all-powerful and art-obsessed Lorenzo de Medici from an early age, youthful works like the Battle of the Centaurs and the Madonna of the Steps firmly marked Michelangelo as one to watch.

But a deteriorating political situation impelled Michelangelo to leave Florence in 1494, embarking on a journey that would take him to Venice (where Albrecht Dürer was holding court), as well as Bologna. After a brief return to a gloomy Florence now under the thrall of the apocalyptic preacher Savonarola, Michelangelo was on the road again. And this time, he set his sights on Rome.

Rome in the year 1496 bore little resemblance to the glittering cultural capital it would become over the next three centuries. Vast tracts of the ancient city within the Aurelian walls lay abandoned, the only inhabited area clinging to the banks of the Tiber. The rest was given over to monasteries and vineyards, fields and wastelands.

But for the ambitious young sculptor, like Donatello before him, Rome could offer him something that Florence could not: a wealth of ancient sculptures and buildings offering a priceless crash-course in the story and techniques of art. Every day seemed to bring new finds from the sparsely inhabited Roman urbs, providing a yardstick against which Michelangelo might judge his own efforts.

Things in Rome were in any case rapidly changing. Ever since the return of the papacy from Avignon earlier in the century the city was gradually reasserting itself: new palaces in the Renaissance style were going up everywhere, whilst restoration works were underway in churches across the city. The prospect of commissions from a series of fabulously wealthy humanist popes (including the Borgia pope Alexander VI, who occupied the throne of St. Peter on Michelangelo’s arrival) and cardinals, bankers and businessmen, saw a steadily increasing influx of artists to the city.

Lodging under the protection of Cardinal Raffaele Riario, who had been famously duped by an unscrupulous art dealer into purchasing a sculpture by Michelangelo’s hand mocked up to look like an ancient Roman work, commissions soon rolled in for Michelangelo.

The wealthy banker Jacopo Galli was quick to recognise his preternatural skill, ordering a Bacchus from the young sculptor that was described in admiring terms by contemporaries as a match for the sculptures of antiquity. But it was his next work - his first public commission in the Eternal City - that would cement the hotshot young Florentine’s reputation, and set him on the fast-track to artistic immortality: The Pietà. 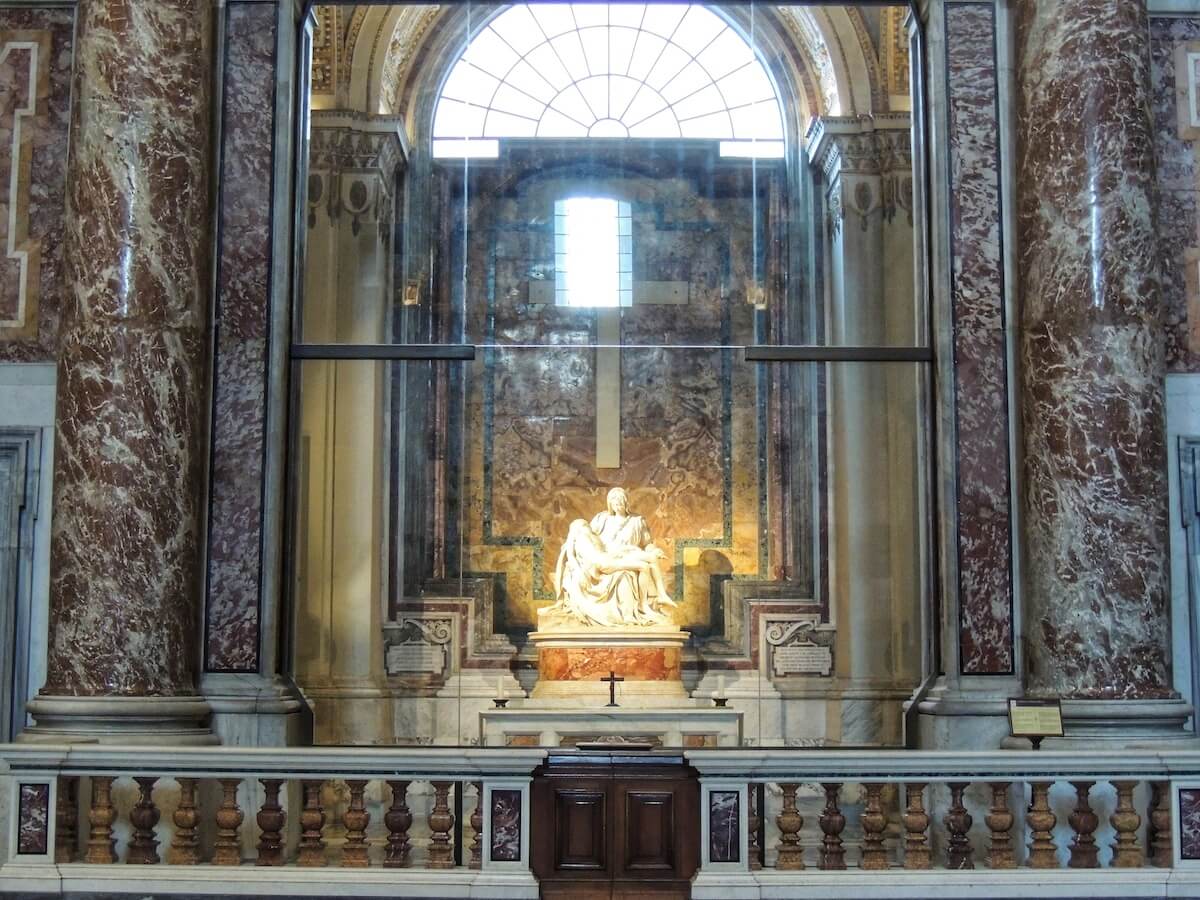 On August 27th, 1498, Michelangelo signed a contract agreeing to provide a statue depicting the Virgin Mary cradling the dead Christ for the funeral monument of the French Cardinal Jean de Bilhères in St. Peter’s Basilica. By the time the contract was finalised, Michelangelo had already spent some months in Carrara supervising the quarrying of the marble block that was to become the Pietà, a magnificent monolith that Michelangelo described as the most perfect he had ever seen.

From the outset, it seems that Michelangelo was convinced of his ability to produce something special for the French prelate. Acting as guarantor for the contract, Galli promised Bilhères ‘the most beautiful work of marble in Rome, one that no living artist could better.’ An extraordinary claim for a greenhorn artist still untried in the difficult task of monumental public sculpture, but Michelangelo was no ordinary young man. What he would come up with was truly groundbreaking. 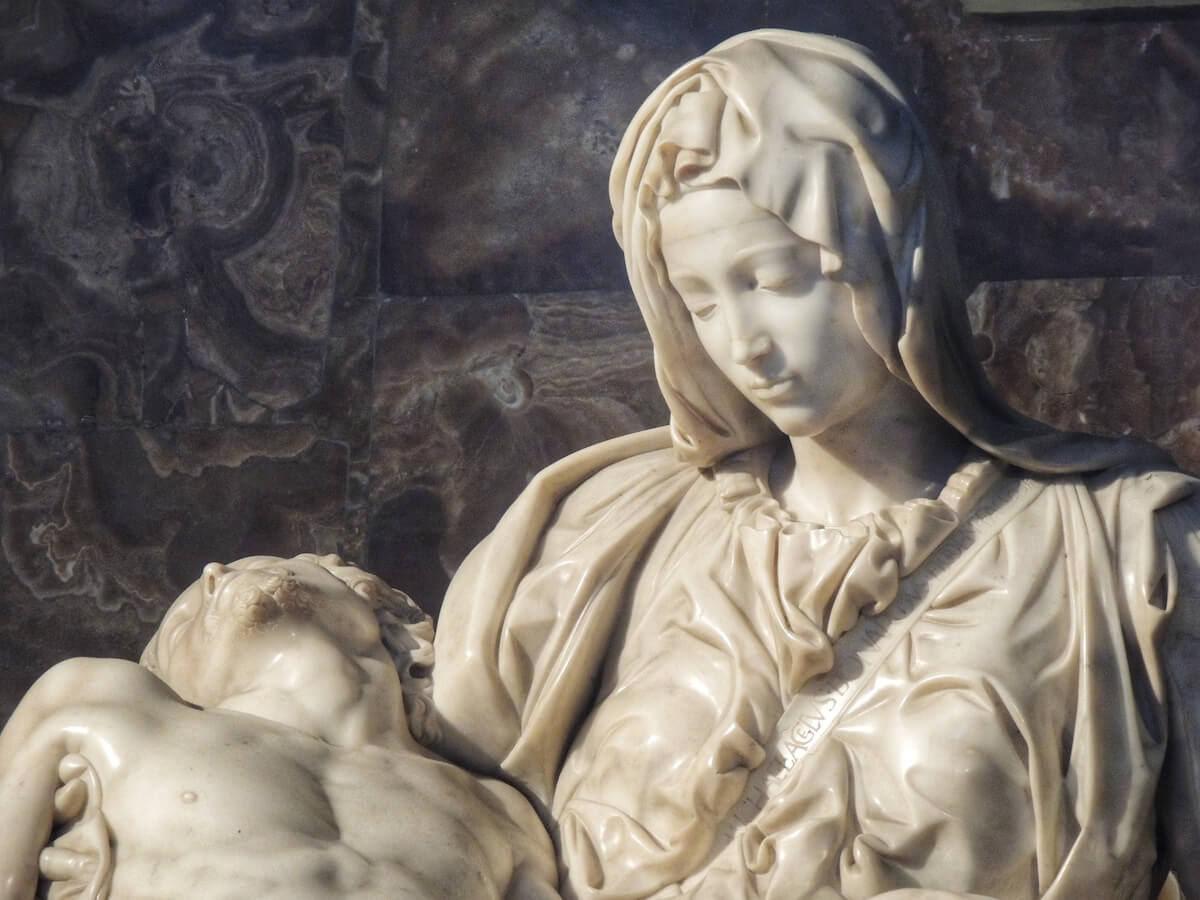 The action takes place on the hill of Golgotha, shortly after Christ’s death and removal from the cross. Mary is alone in a desolate landscape, sitting on a rock. In one of the most tender depictions of grief in all of art, the youthful Mary cradles the lifeless but magnificently carved form of her crucified son on her lap. A subtle but profoundly moving expression of sorrow plays across the Virgin’s features as her downcast eyes behold Christ’s limp, heavy body.

The scene is drawn from the devotional conceit of the ‘Seven Sorrows of the Virgin,’ and a number of contemporary sermons describe the sadness of Mary as she holds her dead child, remembering how she held him years before as a young mother in Bethlehem.

In addition to the profound emotional power and compositional perfection embodied in the Pietà, the sheer natural ability of the young Michelangelo’s carving is breathtaking. The faces of Christ and Mary possess such delicacy and refinement that it’s hard to accept mere months before they were imprisoned in slabs of rough-hewn stone, whilst the deeply incised swirling drapery of the Virgin’s lap is both extremely lifelike and marvellously expressive, a precursor to Bernini’s virtuoso depictions of seemingly living fabric a century later.

Cardinal Bilhères and the Chapel of St. Petronilla 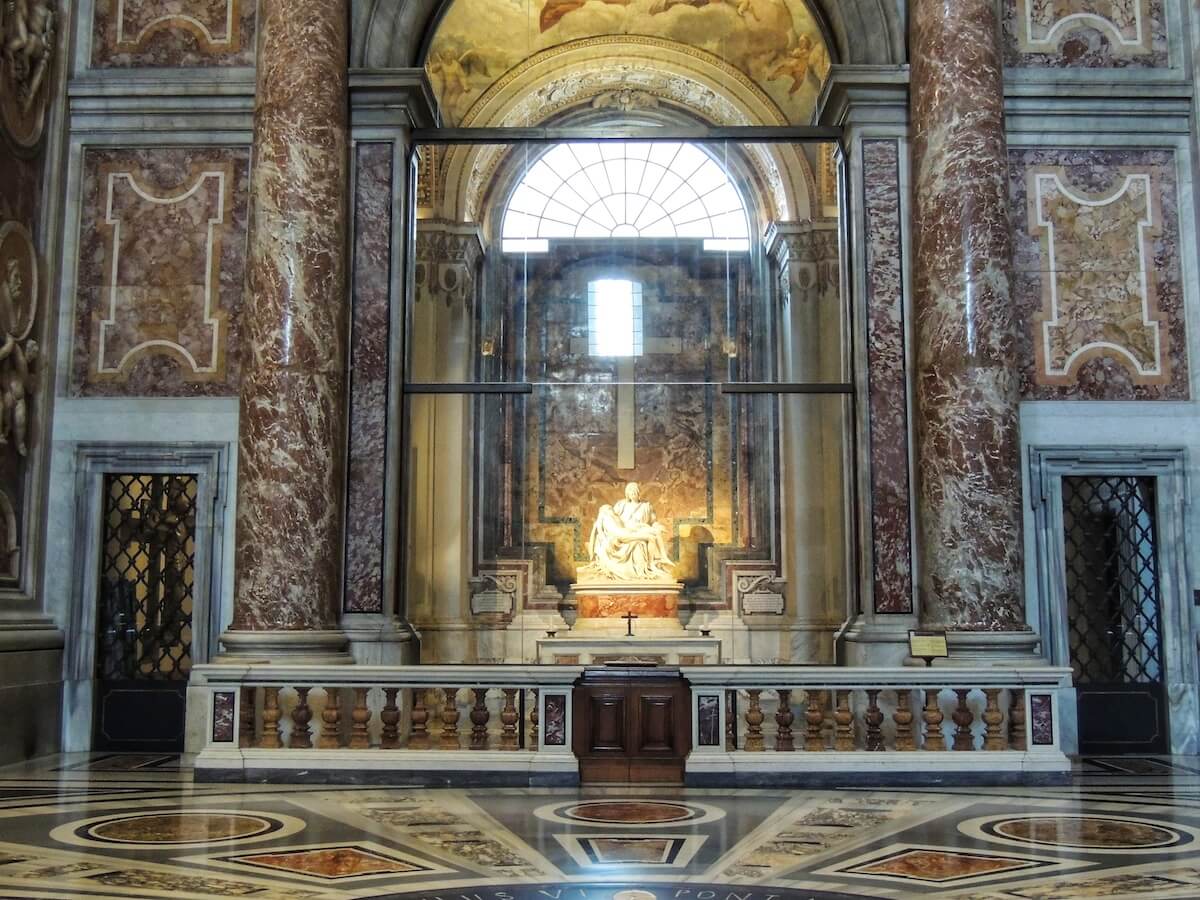 Unfortunately, our access to Michelangelo’s sculpture today bears little relationship to the original context in which the sculpture was intended to be seen. Protected by abulletproof glass in response to an iconoclastic attack on the work in the 1970s these days the Pietà is located on a pedestal in a chapel off the right hand nave of St. Peter’s basilica, and the viewer can’t get anywhere near the marble itself.

The sculpture was originally created for the church of Santa Petronilla off the south transept of Old St. Peter’s - in fact a stand-alone ancient mausoleum that had been incorporated into the fabric of the Constantinian church centuries prior. Santa Petronilla was destroyed to make way for the construction of new St. Peter’s only a few short years after the Pieta was installed there, meaning that very few people had the chance to see Michelangelo’s sculpture as he originally intended.

It seems likely that Cardinal Bilheres conceived of Michelangelo’s sculpture as a funereal monument in the context of a small funeral chapel within Santa Petronilla, as he also commissioned a tomb slab in the vein of those that were created for the Renaissance popes in St. Peter’s by Antonio Pollaiuolo.

One aspect of the original orientation of the sculpture seems certain: the Pietà was not positioned on a high plinth as we see it today, but was instead place directly on the floor of the chapel and intended to be seen from eye-level. From this position the apparent size disparity between the figures is resolved, and the figure of Christ becomes much more prominent, his face more visible. 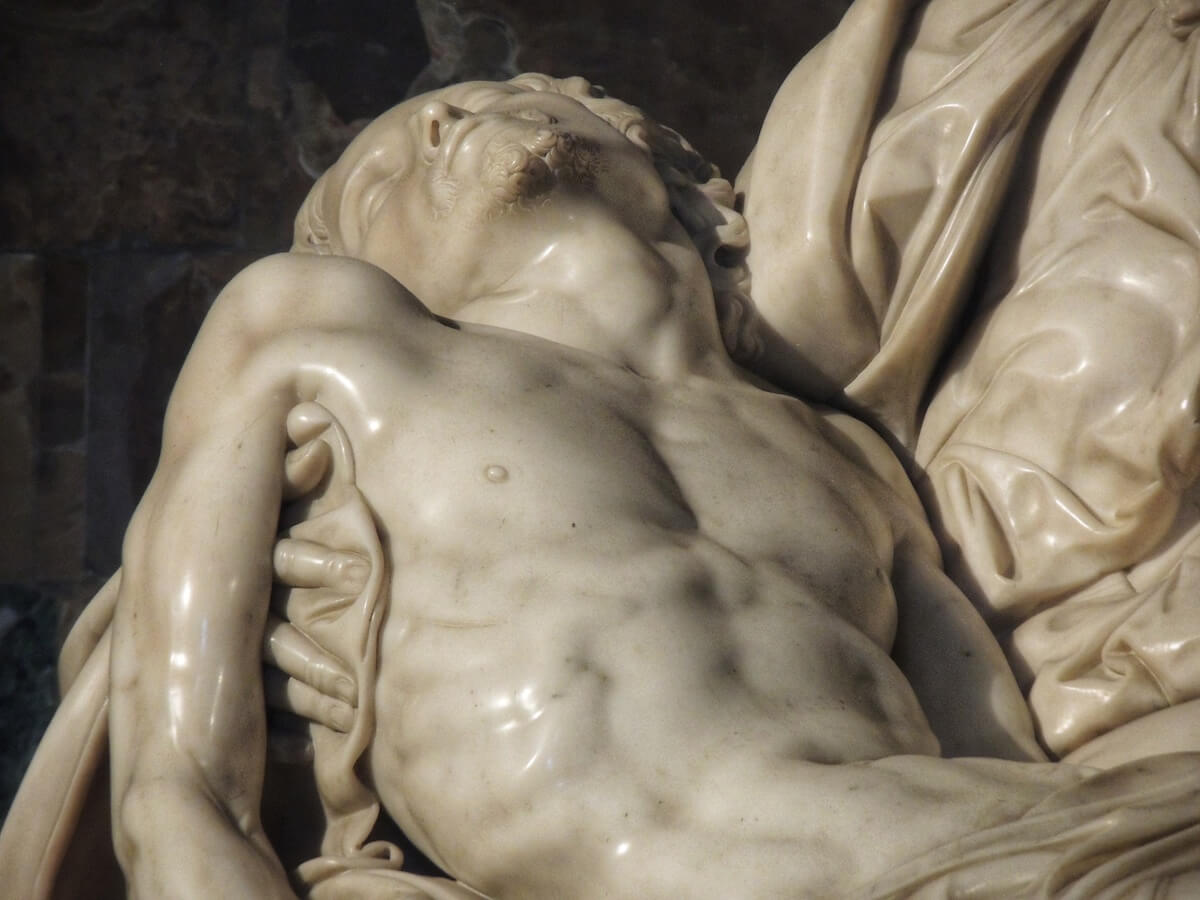 Even though today we are more likely to focus on the extraordinary beauty of the Virgin’s face, many contemporaries were equally struck by Christ’s visage, Vasari fawning over the ‘incredibly sweet air of the head.’ But regardless of Michelangelo’s original intentions, it’s hard to deny that Mary is the real star of the show. 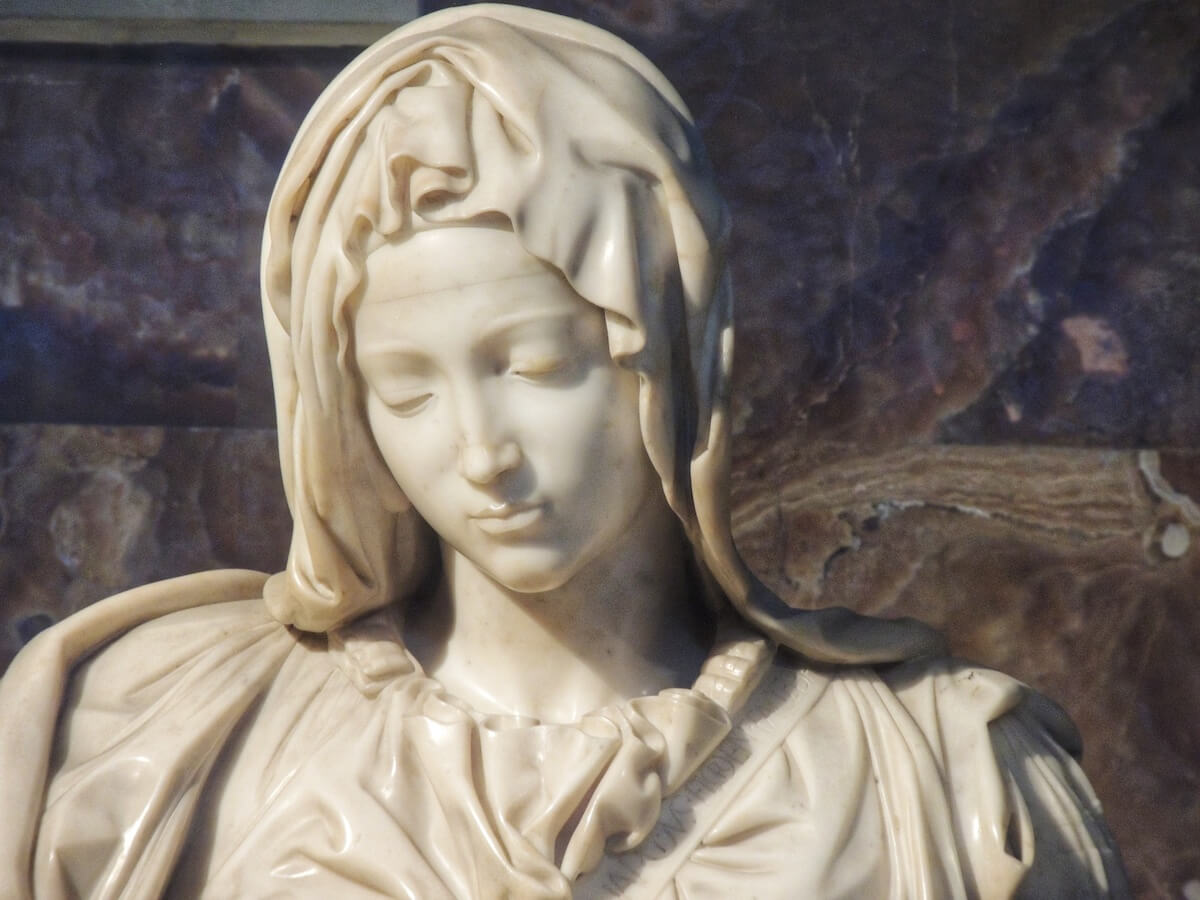 Some of the more literal minded observers of Michelangelo’s work complained that the youthfulness of the Virgin Mary was an affront to verisimilitude, and that the mother of Christ could not reasonably be expected to look younger than her own son. According to his biographer Ascanio Condivi, Michelangelo responded that as a virgin it was hardly surprising that Mary had kept her looks, free as she was from the ageing rigours of worldly sin.

But we must, I think, take Michelangelo’s response with a pinch of salt. Notorious for his ironic putdowns and unwillingness to explain himself to those he considered unworthy of his intellect, Michelangelo’s comment is a clear parody of the literal small-mindedness of his accusers. The youthfulness of Mary, although not commonly seen in earlier representations of the subject primarily in northern Europe, is a perfectly rational theological choice and reflection of the mystical relationship that existed between Christ and the Virgin Mary.

Although Mary is Christ’s earthly mother, she is also simultaneously his wife and daughter, reflecting the mysterious multiple nature of the Godhead as defined in the Nicene Creed. Indeed, there are many examples in Rome that showcase the Virgin and Christ as a youthful couple. In the apse mosaics of Santa Maria in Trastevere and Santa Maria Maggiore, the Virgin and Christ are represented as equals in age and rank, reigning over heaven together.

That Michelangelo’s Pietà follows in this tradition and foreshadows their impending union in heaven is made clear in a contemporary poem written by Giovanni Battista Strozzi in praise of Michelangelo’s sculpture, where the poet describes Christ as the Virgin’s ‘Sposo, figliuolo e padre’ - husband, son and father, and the Virgin Mary as ‘Unica sposa sua, figliuola e madre” - ‘his wife, daughter and mother.’

Michelangelo’s choice to represent the Virgin as a youthful young woman was not the anachronism of a sculptor lost in his love for beauty - it was a profoundly fitting gesture from an artist capable of imbuing his works with deep levels of theological meaning. 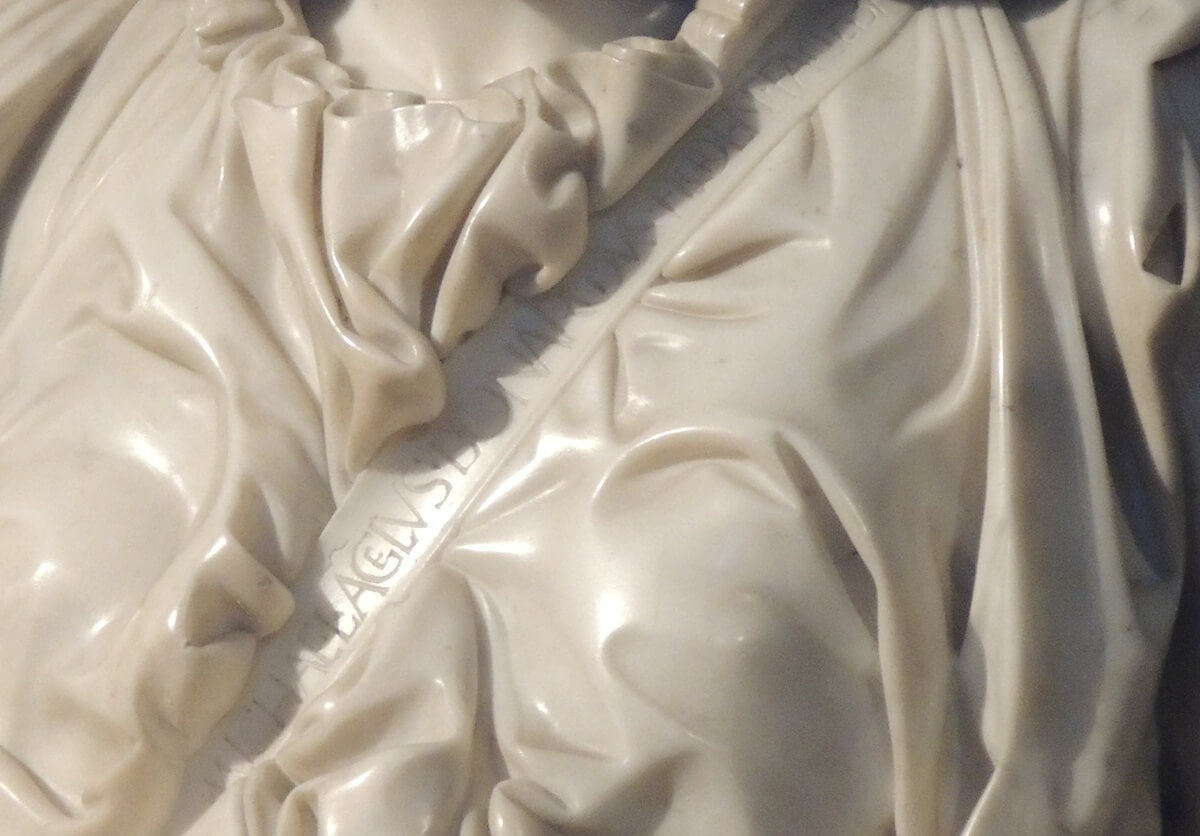 Notwithstanding the rather petty critiques of the Virgin’s youthfulness, Michelangelo’s sculpture was immediately hailed a masterpiece. The insistent lifelessness of Christ’s beautiful body and the subtle grief of Mary combine to elevate sculpture to a realm of perfection that few artists had succeeded in before or since. Vasari spoke for many of his contemporaries when he wrote that it was a ‘miracle that a formless block of stone could ever have been reduced to a perfection that nature is scarcely able to create in the flesh.’

It seems that the usually down-in-the-mouth Michelangelo himself was uncharacteristically pleased with the fruits of his labour, for it was the only work that he would ever sign. Running across the sash on the Virgin’s lap, Michelangelo inscribed the MICHAEL ANGELUS BONAROTUS FLORENT[INUS] FACIEBA[T].

The story of Michelangelo’s signature on the Pietà is another classic Vasarian anecdote. According to legend, shortly after its completion Michelangelo overheard some Lombard tourists praising the sculpture to the skies. The sculptor’s satisfaction soon turned to chagrin, however, when the doltish out-of-towners credited the work to one of their own countrymen, a second-rate Milanese artist by the name of Gobbo. Outraged at the slight, the notoriously prickly Michelangelo returned to St. Peter’s in the dead of night, chisels in hand, and carved his name prominently onto the work.

The story is almost certainly a tall-tale, but the signature is nonetheless a fascinating document that tells us much of how Michelangelo viewed his own work. The Latin inscription unfolds in the imperfect tense: instead of the closed-off past tense of fecit, the sculptor instead uses the continuous faceibat. 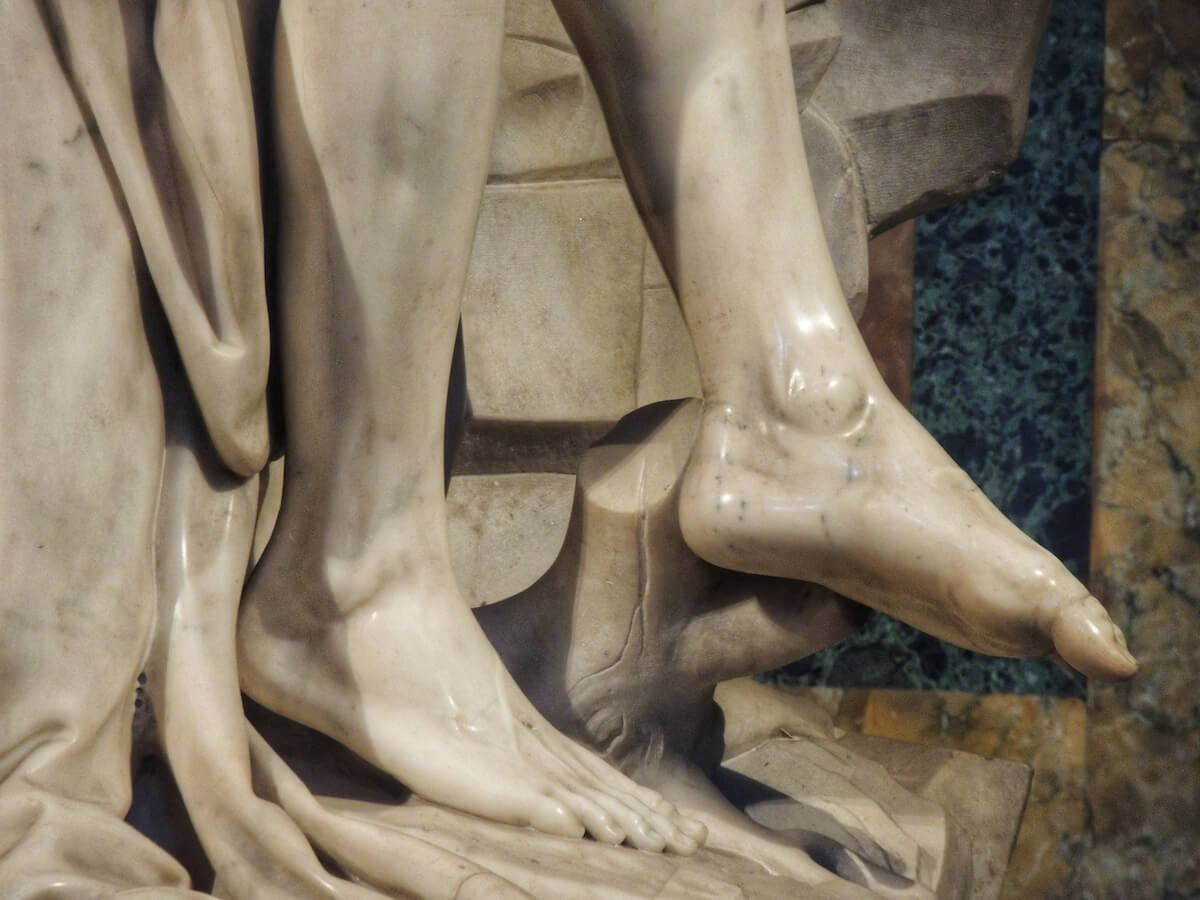 Pliny recounts that the great ancient artist Apelles always signed his works in this way, implying that his works were never truly finished, always in a state of evolution and flux. That Michelangelo chose to conceive of his work similarly points the way to the profound development of his art in the coming decades, when the concept of the non finito, the artwork that resists completion or perfection, would become the recurring calling card of the master’s work.

If the pursuit of artistic perfection is always doomed to failure, however, perhaps nobody has ever come as close as the young Michelangelo in the creation of his first masterpiece.

If you’d like to admire Michelangelo’s magnificent masterpiece in the flesh, be sure to check out our St. Peter’s basilica tours and Vatican tours where we bring you face to face with the extraordinary artworks of the Vatican in the company of an expert!