The Five Towns of the Cinque Terre: Spectacular Beauty on the Italian Riviera 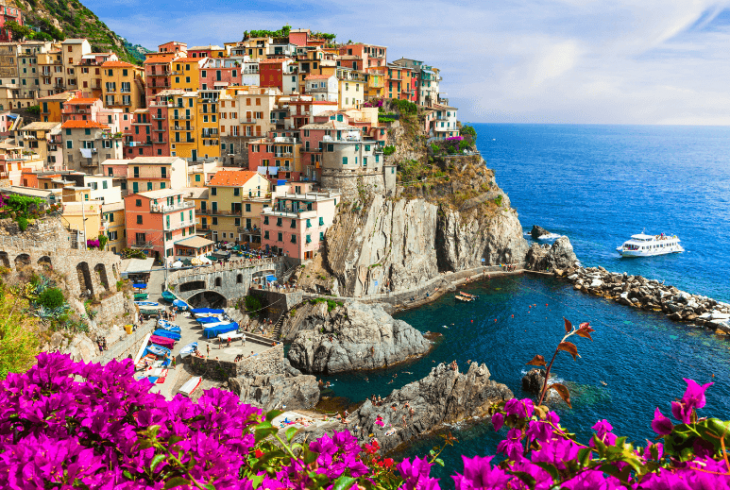 The breathtaking scenery of the Italian riviera along Liguria’s rugged coastline simply has to be seen to be believed. The jewels in this spectacular coastal crown are the five fishing villages known as the Cinque Terre, jaw-droppingly and gravity-defyingly situated on a 10 kilometre stretch of sheer cliffs that tumble precipitously into the glittering waters of the Mediterranean. The five towns that make up the Cinque Terre - Riomaggiore, Manarola, Corniglia, Vernazza and Monterosso - began life as medieval fortified settlements, each protected by a castle overlooking the sea guarding against Saracen raiders. These days the pirate threat is long gone, and the Cinque Terre’s picturesque pastel-coloured villages have taken their well-deserved place as a UNESCO World Heritage Site.

Terraced gardens and fields cut into the forbidding rock faces as far back as the Middle Ages only add to the charm, whilst a series of walking paths clinging to the cliffs make for some of the most fertile hiking ground in the world. And despite the fact that this stunning corner of Italy is entirely and mercifully traffic-free, it’s perfectly easy to make your way quickly from town to town thanks to a 19th-century railway line that traverses the coast via a series of tunnels blasted from the rock. Read on for our guide to the beautiful towns of the Cinque Terre! 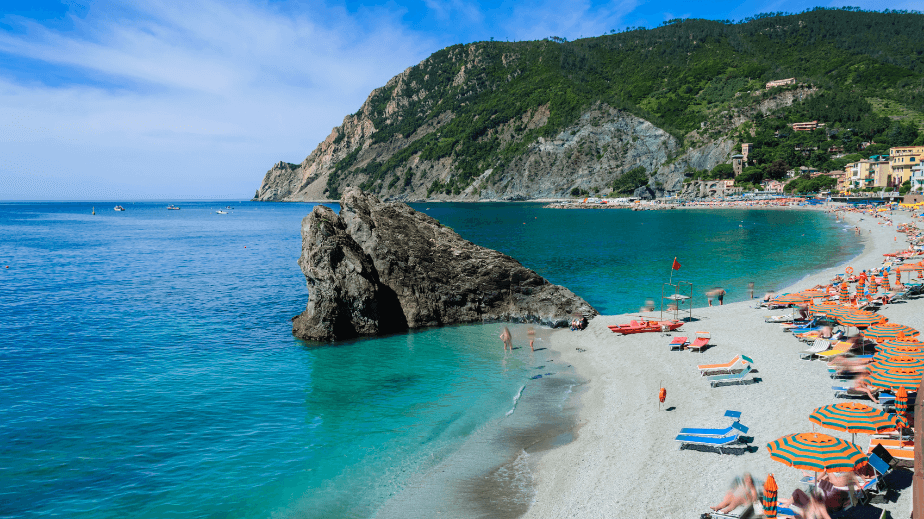 Monterosso is immersed in a spectacular verdant landscape of vineyards, olive trees and lemon groves that scent the air for miles around. Thanks to its relatively larger size Monterosso offers an array of accommodation options, from seafront hotels to `casual guesthouses and farmstays in the surrounding countryside, so it makes a good base for exploring the region. The historic old town is a tangle of atmospheric narrow lanes that hide plenty of excellent restaurants, while in the more modern Fegina quarter (reached via an underground tunnel) a giant statue of Neptune overlooks the only stretch of sandy beach in the Cinque Terre. 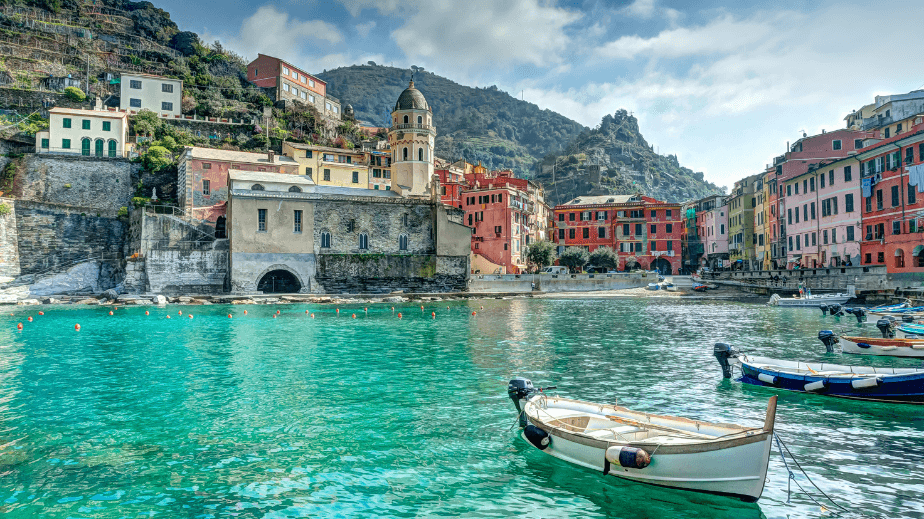 It’s not difficult to get your bearings in diminutive Vernazza, widely regarded as one of the most beautiful towns in Italy: a single main street charts a steep course downwards from the train station at the top of the town all the way to the water’s edge at Vernazza’s harbour. Cobbled Via Roma is lined with enticing cafes and bars, perfect for soaking up the Mediterranean sun and a spot of people watching before you continue the descent to Piazza Marconi right on the coast. Here the tiny port is ringed with picturesque pastel-coloured houses that you won’t be able to resist photographing, with the looming presence of the medieval Belforte castle a reminder of the pirate-threat that was once an ever-present feature of life here. 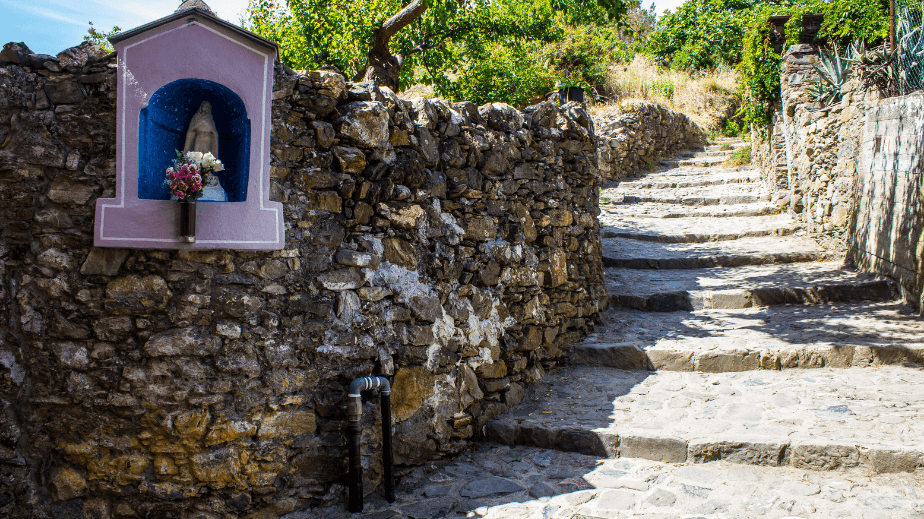 Traditionally considered to be the most tranquil of the five villages, Corniglia is the middle town of the Cinque Terre, and the only one that isn’t located directly on the seafront. Instead the tiny borgo is spectacularly sited on a promontory more than 100 metres above the water. Reaching the village from the train station is something of an undertaking itself: a 382-step brick pathway called the Lardarina that snakes across the mountainside. But what splendid rewards await! Surrounded by fertile vineyards and terraced gardens, Corniglia was a prosperous agricultural centre in antiquity and its historic centre is a maze of brightly-painted houses and narrow cobbled streets that seem immune to the passage of town. At the far side of town a magnificent panoramic terrace (the Belvedere di Santa Maria) offers up heart-stopping views across the Mediterranean, and all 5 of the Cinque Terre are visible from here at once. 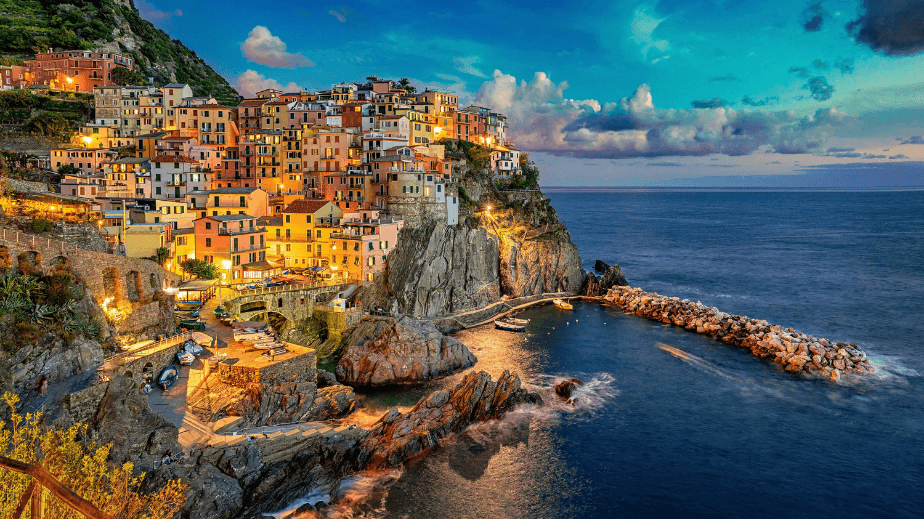 The sight of picturesque Manarola tumbling down a rocky cliff towards its little harbour far below is probably the most iconic view of the Cinque Terre. The route from the top of the town down to the waterfront will take you along steep carrugi, the characteristically narrow laneways typical of Ligurian towns and cities. An eclectic array of fishing boats are usually pulled up on the ramp leading into the water, a reminder that the sea’s bounty has been the lifeblood of the Cinque Terre for centuries. Beyond its romantic beauty, Manarola is renowned for the local Sciacchetrà wine, a sweet white with notes of candied citrus, dried fruit and aromatic herbs on the nose. The town is surrounded by terraces thick with vines, and witnessing the annual harvest is a special experience. 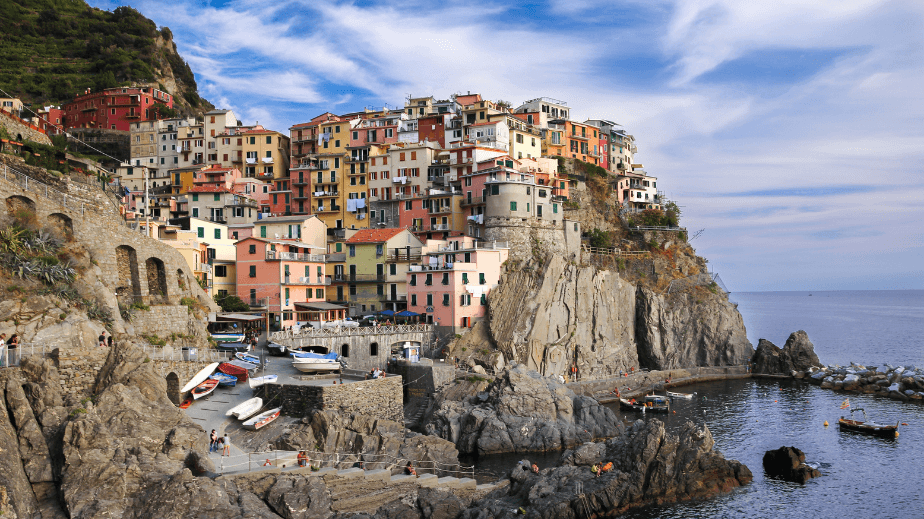 The largest of the towns in the Cinque Terre, Riomaggiore’s brightly-coloured dwellings with their unmistakable green-shuttered windows are an indelible symbol of the Ligurian riviera. The easternmost village of the five, Riomaggiore is frequently chosen as a home base by visitors to the region thanks to its accessible location and wealth of hotels. Make the climb up to the medieval castle that looms over the town, erected in the 13th century as a lookout and defence against pirate raids. The views from the ramparts over the twinkling sea far below are out of this world. Riomaggiore’s tiny, picture-perfect marina meanwhile encapsulates the Cinque Terre at its breathtaking and authentic best. Unfortunately closed until at least 2023 for repairs, the evocatively named Via dell’Amore is a breathtaking cliff-top trail that leads from Riomaggiore to nearby Manarola - check before you travel to see if the route has reopened, as this is one of the world’s most picturesque treks. 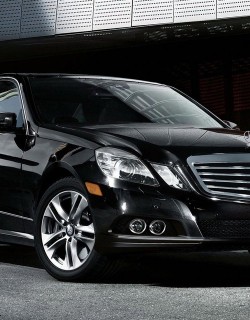