Mediterranean Magic: The Best Towns to Visit on the Amalfi Coast 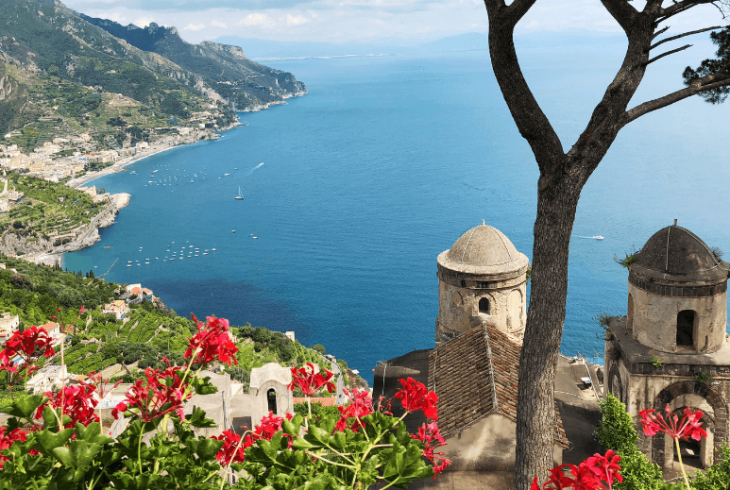 An enchanted land of picturesque towns perched on rugged cliffs, the jaw-dropping Amalfi coast is one of the most spectacular stretches of coastline anywhere in the world. Nestled between the soaring Lattari mountains and the azure waters of the Tyrrhenian sea, the Amalfi coast unfolds along terraces and vineyards cut into the mountainside, with narrow coves and thin stretches of sand providing access to the sea below.

A place where the bygone world of fishermen and shepherds who have worked this land for centuries still lives on side-by-side with the glamorous world of luxury travel, there is something for everyone on the Amalfi Coast. From the boutiques and plush hotels of Positano to the stunning Byzantine architecture of Amalfi, from the paradise villas of Ravello to some of the world’s most dramatic hiking trails, you simply won’t be able to resist the charms of a region that UNESCO has recognised as an outstanding example of the Mediterranean landscape. Read on for our guide to the most beautiful towns on the Amalfi coast. 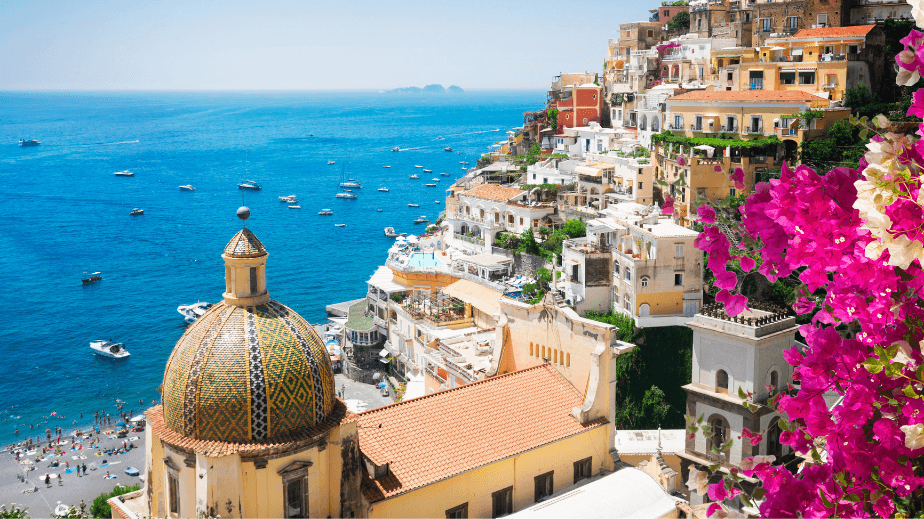 For good reason popular with the jet-setting rich and famous, postcard-perfect Positano has been a resort town since antiquity, when ancient Romans retreated here to take advantage of the restorative sea breezes. The town is startlingly beautiful - think row after row of pastel-coloured houses dramatically tumbling down the cliffs towards the Mediterranean below, narrow laneways wreathed in wisteria and a lovely church at the heart of it all with a spectacular majolica-tiled roof.

Positano is known for its shopping: pretty little boutiques line the streets, selling everything from designer fashion to  handmade sandals. Be sure to pack your walking shoes: the different levels of Positano are linked by a seemingly endless series of steep stairways that will eventually lead you down to the waterfront at the town’s two beaches: Spiaggia Grande and Spiaggia del Fornillo. 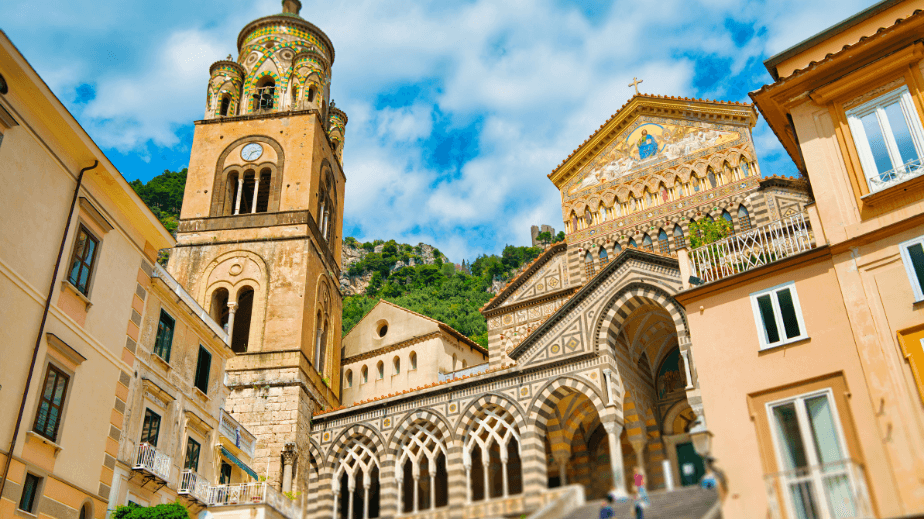 These days the city that gives the coastline its name is a charming but out-of-the-way town of just 5,000 inhabitants, but it wasn't always this way. It might be hard to believe, but for a period during the Middle Ages Amalfi counted itself amongst Italy’s maritime superpowers. A thriving population of 70,000 people and a fleet of ships that was the envy of the Mediterranean brought untold wealth to this isolated corner of the Campania coast before a devastating earthquake sent most of the town tumbling into the sea in 1343.

The most impressive reminder of Amalfi’s glorious past is the city’s magnificent Byzantine cathedral, built to house the relics of Saint Andrew - brought here by the empire’s ships way back in 1208. Next door, the 13th-century Chiostro del Paradiso (cloister of Paradise) lives up to its name: delicate Arabic arches surround a leafy garden, final resting place of the town’s most important citizens. If you’d like to visit Amalfi’s cathedral on a tour of the Amalfi Coast, then be sure to check out our private Amalfi coast itineraries. 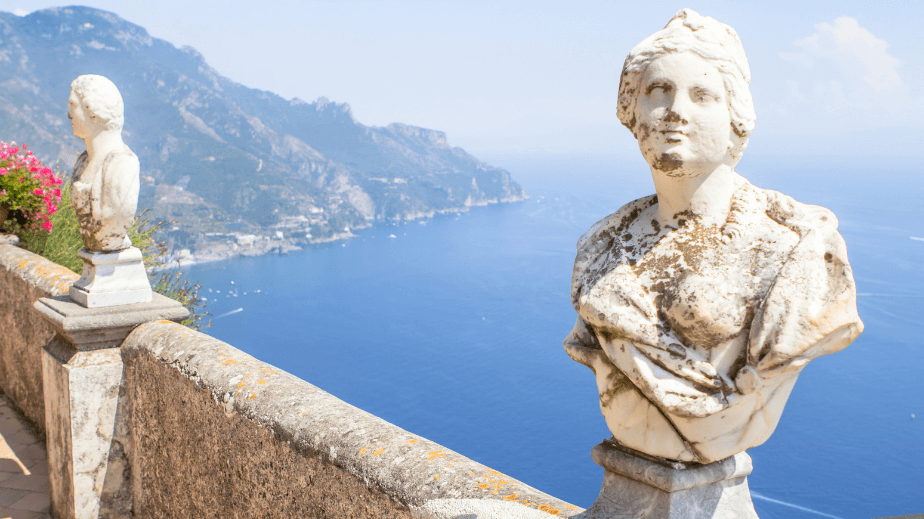 Long a favourite amongst writers, the extraordinary views across the Tyrrhenian sea from hilltop Ravello have to be seen to be believed. Perched 350 metres above sea level, rarefied Ravello was founded in the 5th century as a safe-haven from Barbarian raiders, and even today the town still feels removed from the chaotic bustle of life down on the coast. Just wandering its calm streets is a real pleasure: stop off at an open-air cafe in the central piazza, or breathe in the fresh lemon-scented air in the town’s innumerable gardens.

The town is most famous for its two magnificent villas - Villa Rufolo and Villa Cimbroneri. Beloved by German composer Richard Wagner (who was inspired by the villa for the staging of his opera Parsifal), the garden of Villa Rufolo is the fabulous setting for a series of world-class classical concerts that take place in Ravello each summer. Over the years Villa Cimbrone meanwhile has played host to everyone from Greta Garbo to Winston Churchill and Salvador Dali, and its Terrazza dell’Infinito (Terrace of Infinity) is a breathtaking encapsulation of everything that makes the Amalfi coast so special: classical statues and blooming flowers frame a panoramic view of the entire coastline, while the blue waters of the sea look impossibly inviting far below. 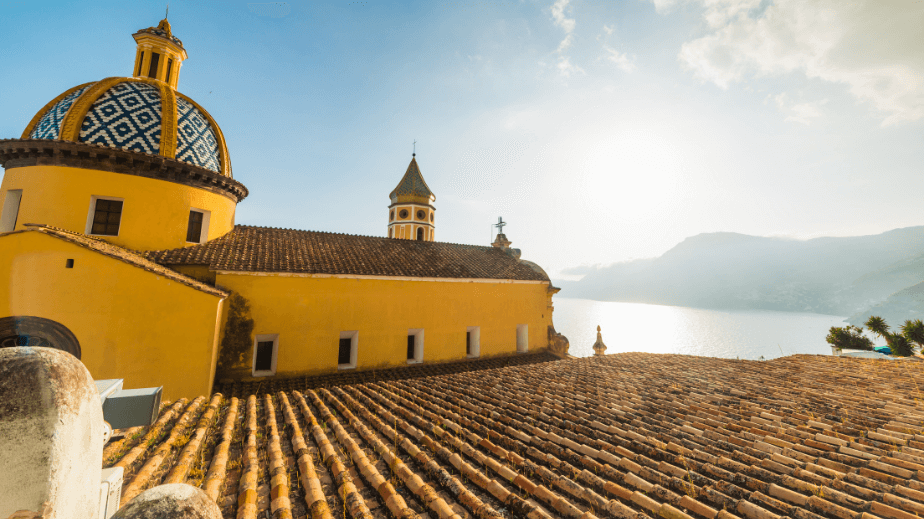 Sleepy Praiano is the perfect antidote for anyone looking to escape the crowded centres of Positano and Amalfi during the height of the summer months. With no tourist attractions or town centre as such, Praiano is still passed over on most itineraries. But this little fishing village and one-time important centre of the silk trade is a lovely surprise for those who do stop here. Whitewashed houses speckle the hillside of Monte Sant’Angelo as it runs down to a small sandy beach enclosed in a lovely little cove, flanked by restaurants housed in former fishermen dwellings - try Da Armandino for excellent fresh fish. 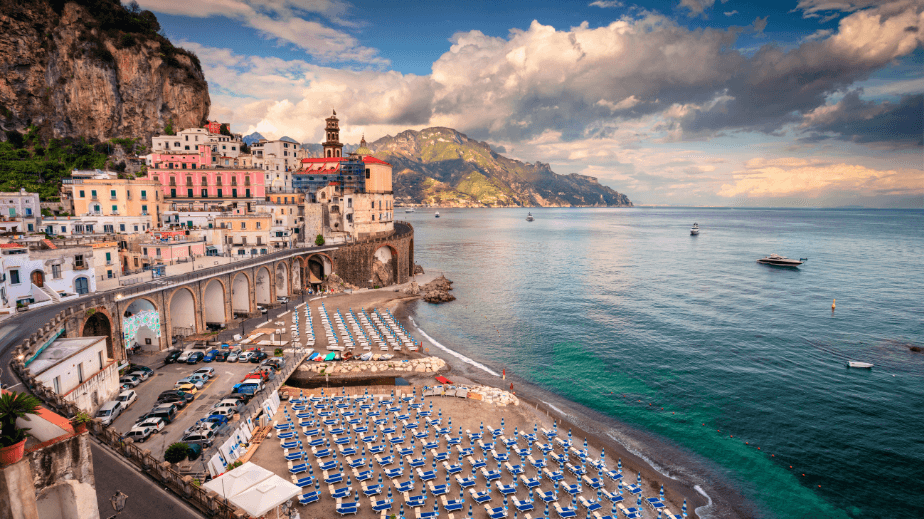 Tiny Atrani is just a mile down the road from Amalfi, but it seems a world away from its often crowded big brother. A fishing village nestled between the Monte Civita and Monte Aureo, Atrani covers an area of just 0.1206 km2, making it officially Italy’s smallest town. Atrani’s tightly-packed whitewashed centro storico is about as Mediterranean as you can get, a tangle of lanes and houses snaking up the hillside via vertiginous stairways. Keep climbing and you’ll eventually emerge blinking into the sunlight at the Piazzetta, Atrani’s main square where sunset views over the sea are hard to match. 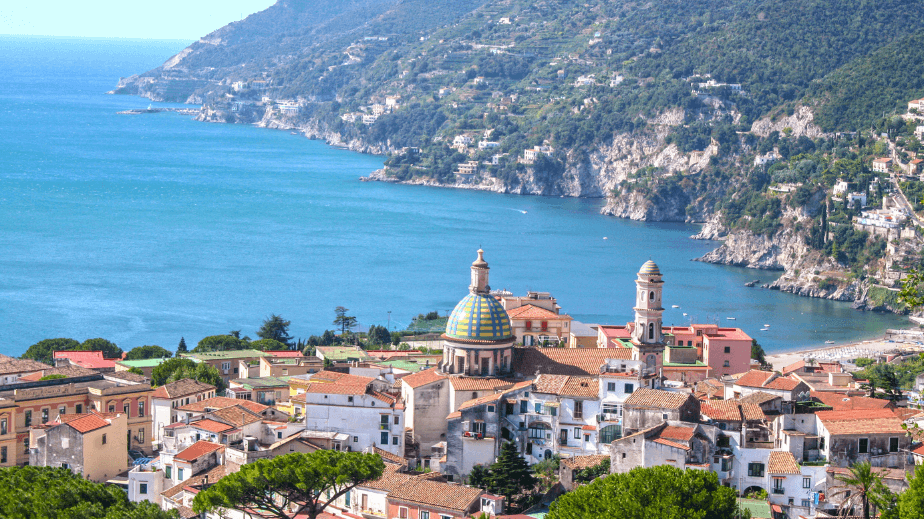 Standing at the far southern end of the Amalfi coast, Vietri sul Mare is the place to go if you’re interested in ceramics. Locals have been firing up their kilns here since ancient times, but production really took off in the 17th- century when the Bourbon court in Naples took a fancy to the town’s distinctive Mediterranean-inspired ware. Today the town is packed with shops selling Vietri majolica, so if you’re looking to bring back a memory of the Amalfi-coast be sure to stop off here.

Through Eternity Tours offer expert-led guided itineraries to the Amalfi Coast and throughout the Campania region. With private transport provided throughout, on our Amalfi Coast tours you’ll be able to spend your time admiring the jaw-dropping scenery rather than watching the road! Check out our range of Amalfi Coast itineraries on our website. 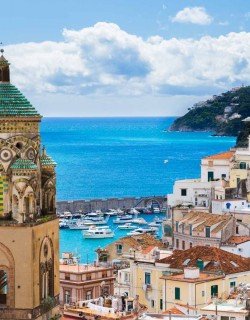 Day Trip from Rome to the Amalfi Coast by High Speed Train and Car: Immersive Journey