5 highlights of the Vatican Pinacoteca by Raphael, Titian, Da Vinci & others.

The Vatican Museums can be overwhelming. With 54 galleries containing some of the greatest sculptures and paintings in the world, it’s impossible to see everything in one visit. Go on a Vatican Tour with Through Eternity to see the incredible collection of the Pinacoteca of the Vatican Museums and much more.

The Pinacoteca (Picture Gallery) is one of the more modern sections of the Vatican Museums, opened in the 1930s to display the papal collection of paintings. The gallery comprises sixteen rooms of some of the finest paintings in the world, from medieval angels to seventeenth century martyrdoms. They’re all worth seeing, but these are some of the highlights.

This exquisite miniature painting shows the transition from medieval to early Renaissance, retaining the golden background that was so popular in earlier paintings, but moving towards a new style.

The small dimensions of the painting suggest it was intended for private worship. Mary holds a rose, symbolising wisdom, while St Dominic and St Catherine kneel beside her. Fra Angelico belonged to the Dominican order, which explains the presence of the saint at Mary’s side.

Madonna and Child was a favourite subject for Italian artists, and it’s an obvious choice for an artist as devout as Fra Angelico. The painter has always been highly regarded by the popes, and in 1982 he was beatified by Pope John Paul II.

The Vatican Museums are full of famous works by Raphael, and a visit to the Raphael Rooms is a must. However, a Pinacoteca tour will show you that there’s even more Raphael to be discovered within the Vatican, such as the beautiful Transfiguration.

According to Vasari, Raphael’s last painting was his “most beautiful and most divine” work. It is unusual for depicting two different Biblical scenes in the same painting – the transfiguration of Christ in the upper section, and the Apostles helping a boy suffering from demonic possession in the lower section. This dramatic work was likely influenced by Michelangelo, and its unique composition and symbolism has attracted a lot of critical attention. Even compared to Raphael’s other great works, the Transfiguration stands out due to its vivid colours and dramatic energy.

This haunting sketch by Leonardo Da Vinci is unfinished. St Jerome sits in the desert, living the life of a hermit. The saint is typically portrayed with a lion; after removing a thorn from its paw, the lion became St Jerome’s loyal companion. This lion is little more than an outline, and both the saint and the lion have a ghostly quality.

Legend has it that the sketch was discovered by a cardinal in separate parts – one section was being used as a table-top, while another was found being used as the cover for a shoe-maker’s stool. It seems appropriate that the origins and history are shrouded in mystery, given the mysterious nature of the sketch.

St Helena, the mother of the emperor Constantine, had a dream that led her to find the True Cross in Jerusalem. Veronese’s painting shows her sleeping peacefully, while a winged cherub holds the cross in front of her. St Helena’s dreamy expression and relaxed posture create a tranquil atmosphere, while her sumptuous clothes suggest wealth and luxury.

Although Veronese has been less appreciated than some of his contemporaries, this beautiful painting shows that he was a master colourist. Delacroix commented that Veronese achieved the seemingly impossible feat of making light without violent contrasts, as you can see from the rich yet subtle colours in St Helena.

One of Caravaggio’s many masterpieces, this painting draws attention to Christ’s physicality rather than depicting him in an ethereal, idealised way. The composition emphasises the weight of Christ’s body, as all the other figures in the painting are pulled down towards him. The painting is a classic example of Caravaggio’s use of chiaroscuro, as Christ’s torso is illuminated, while the other bodies are almost lost in the darkness. It’s striking for its realism, and the way in which it portrays the burial as a moment of very human suffering and sorrow.

While these five paintings, and indeed the majority of paintings in the Pinacoteca, are all religious in subject matter, they could not be more different. Caravaggio’s theatrical depiction of Christ is a world away from the delicate miniatures of Fra Angelico. 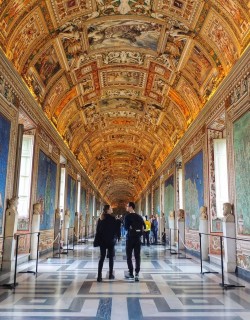 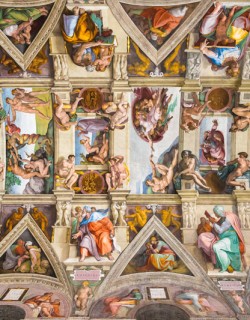 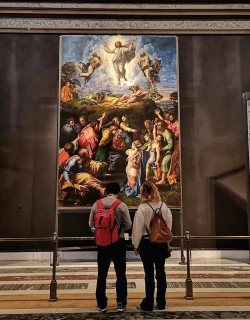 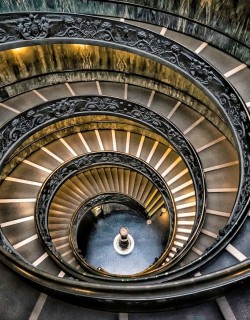