Visiting Montjuïc in Barcelona: What You Need to Know 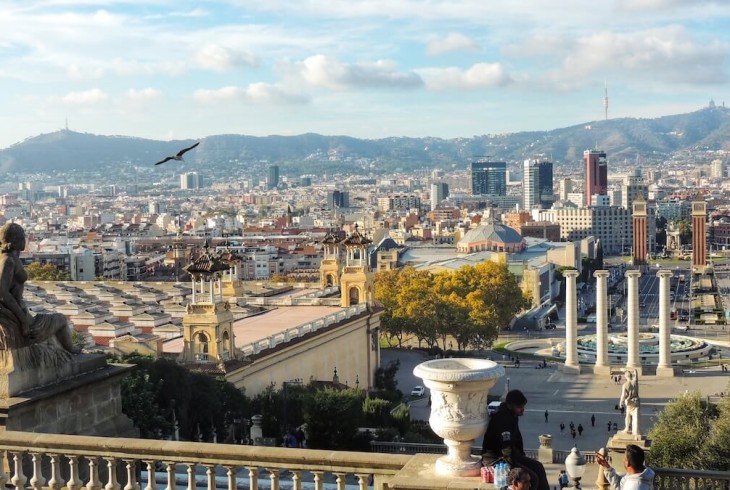 A verdant swathe of green spreading out over an extensive hillside to the southeast of the city centre, leafy Montjuïc is home to some of Barcelona’s finest museums - including the sprawling Museu Nacional d’Art de Catalunya and the Fundació Joan Miró - as well as the extensive venues built for the 1929 World’s Fair and the 1992 Olympic Games, a series of landscaped gardens, a commanding castle, breathtaking panoramic views and much more besides. When the buzz of downtown Barcelona gets too much, then a day in Montjuïc is sure to clear out the cobwebs and recharge your batteries. But with so much to do here, it can be difficult to know where to begin. Find out why a visit to Montjuïc is a must when in Barcelona, and get the lowdown on the best way to visit the area with our guide! 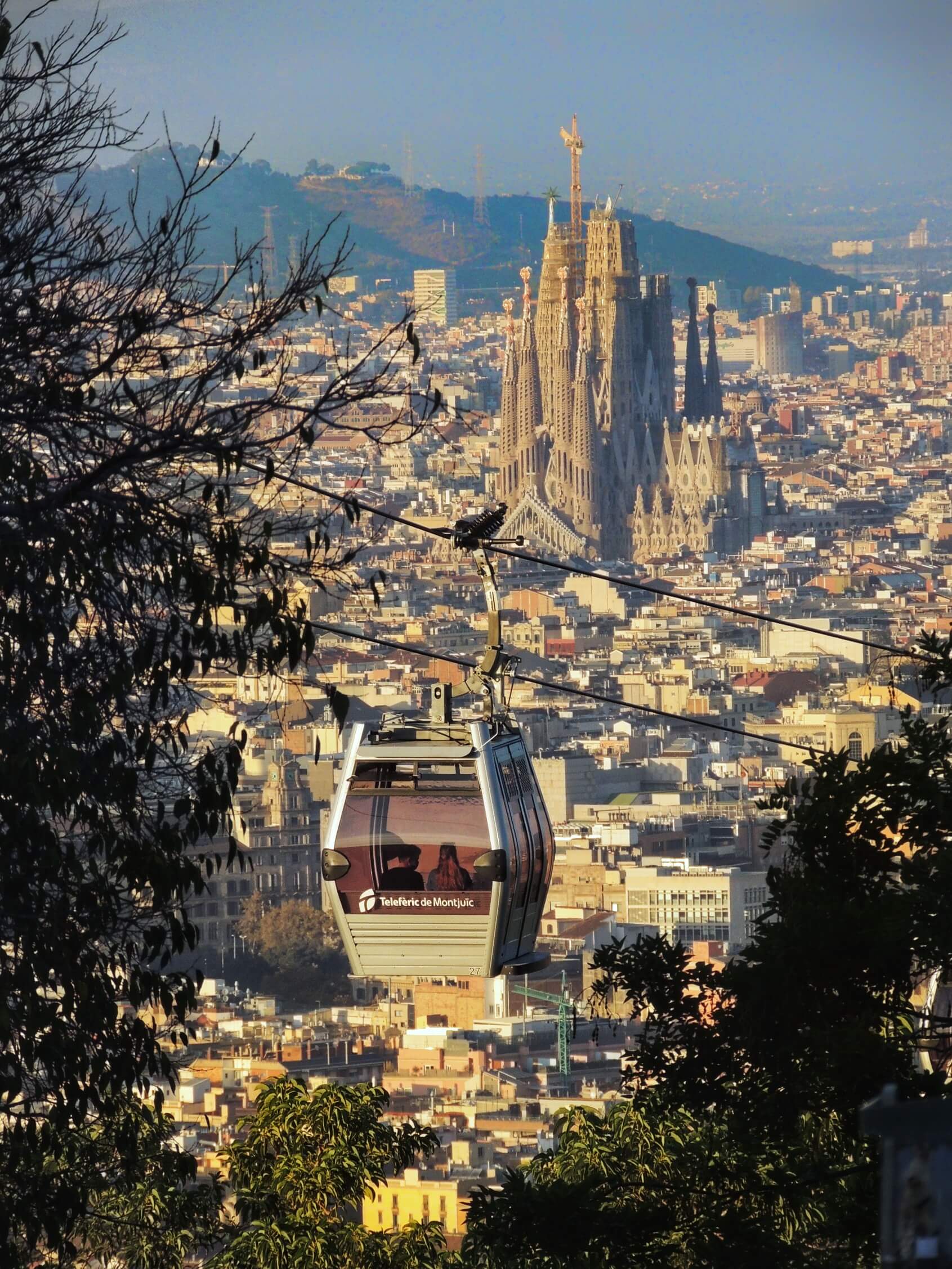 Save your legs and start your day in style by arriving atop Montjuïc hill via a breathtaking cable car ride. There are two separate routes that will whizz you up to the top: the Telefèric del Port begins down in Barceloneta at the Torre de Sant Sebastià, charting a course right over Barcelona’s port and up the hillside to the Montjuïc terminus at Miramar. Panoramic views across the city and the glittering Mediterranean beyond from the glass-sides cabins amply repay the cost of the ticket (€11 one way, €16.50 return). The second cable car option is known as the Telefèric de Montjuïc (€8.40 one way), and will take you from the funicular station halfway up the hill (reached from Paral.lel metro station) to the castle at the top in a matter of minutes.

Immerse yourself in the magical world of Joan Miró 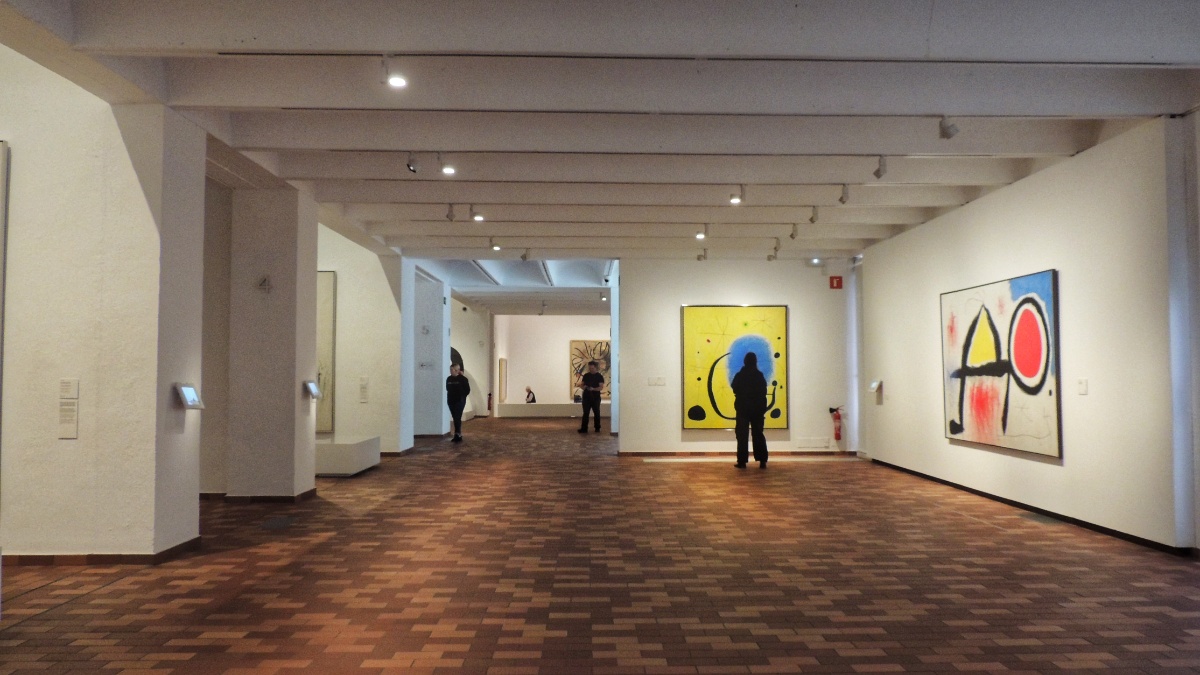 Renowned for his colourful symbolic canvases, Joan Miró is Barcelona’s most famous 20th-century visual artist - and Montjuïc’s Fondacio de Joan Miró is the best place to get to grips with the creative language of this modern master. The spectacular modernist gallery set amongst the dense greenery of Montjuïc’s terraced gardens was designed by Miró’s friend Josep Lluis Sert, a highly respected modernist architect in his own right. The airy, sober and light filled spaces - all clean lines, white walls and plate-glass windows snaking around courtyards and gurgling fountains - perfectly complement the vibrant whimsy of Miró’s creations, creations that the unconventional painter paradoxically conceived of as an ‘assassination of painting’ itself. 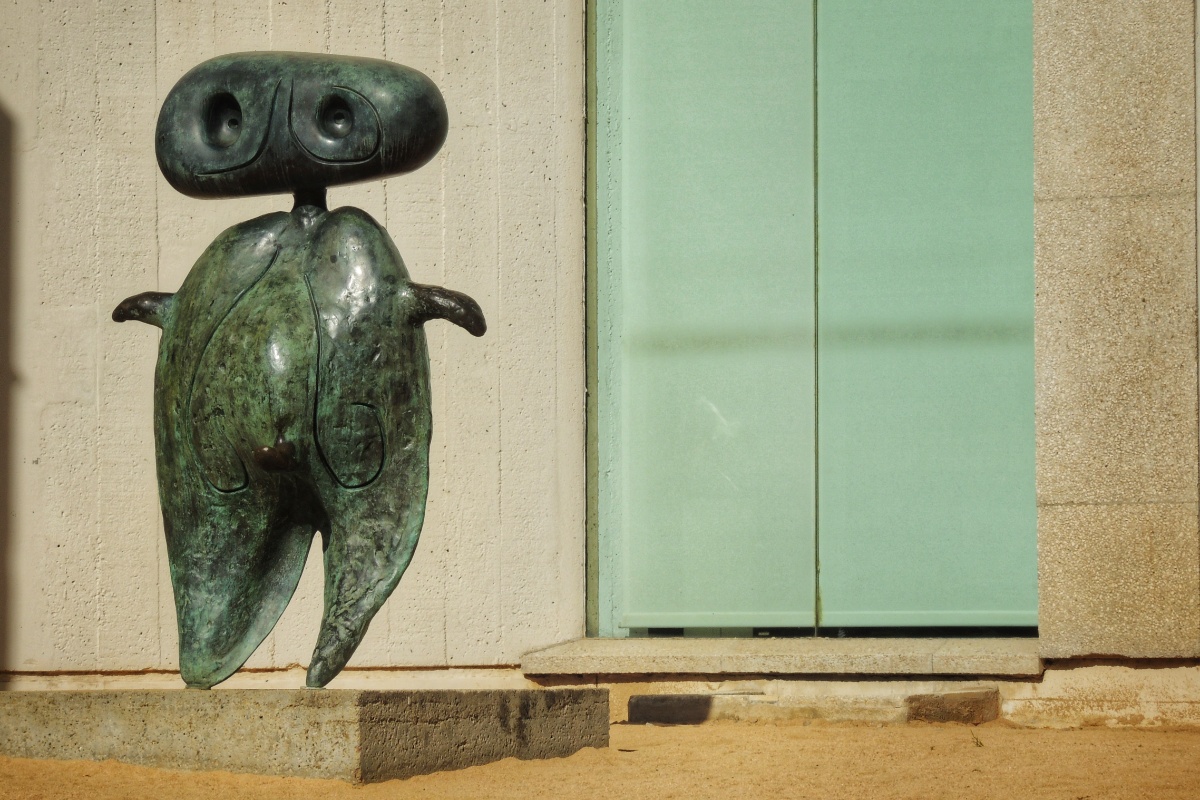 With a collection encompassing hundreds of paintings, sculptures, installations and drawings, the Miró Foundation offers a wide-ranging overview of the artist’s career, from tentative early sketches through to mature symbolist works and late experiments in mixed media. Amongst many highlights, look out for the iconic Personatge Davant del Sol, the giant Tapis de la Fundacio tapestry (always a big hit with kids) and a series of eccentric, childlike sculptures on the museum’s panoramic flat roof.

Channel your inner gold medalist at the Olympic Stadium 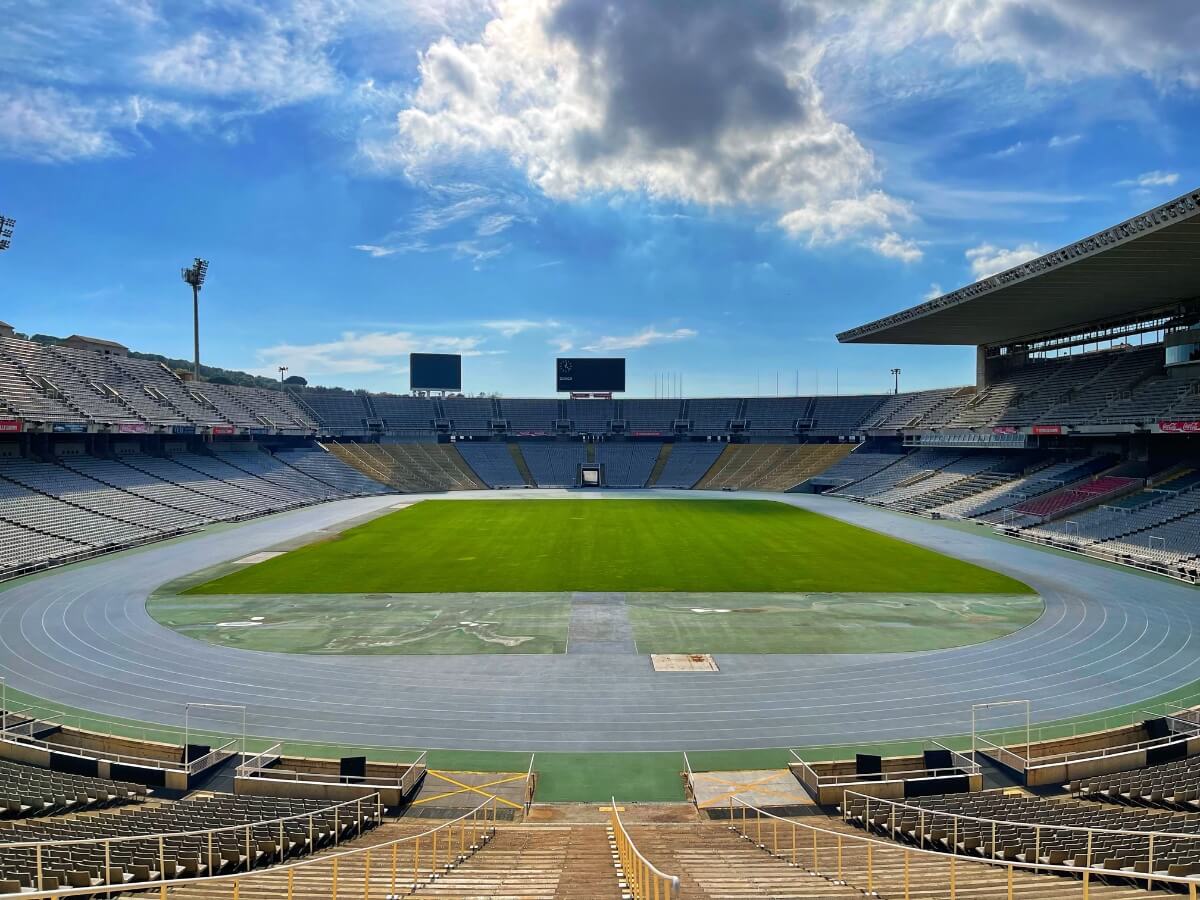 The 1992 Olympics in Barcelona is widely regarded as one of the most successful stagings of the modern Games, thanks in no small part to the exceptional facilities laid on by the host city. Much of the action took place in Montjuïc, where the renovated Estadi Olímpic de Montjuïc took centre stage. Originally designed in 1929 for the World’s Fair, these days you can wander into the impressive stadium for free (resist the temptation to test your speed on the track, though). Also part of the Olympic Ring complex is the impressive multi-purpose Palau Sant Jordi, designed by Japanese architect Arata Isozaki to host gymnastics, basketball and volleyball. 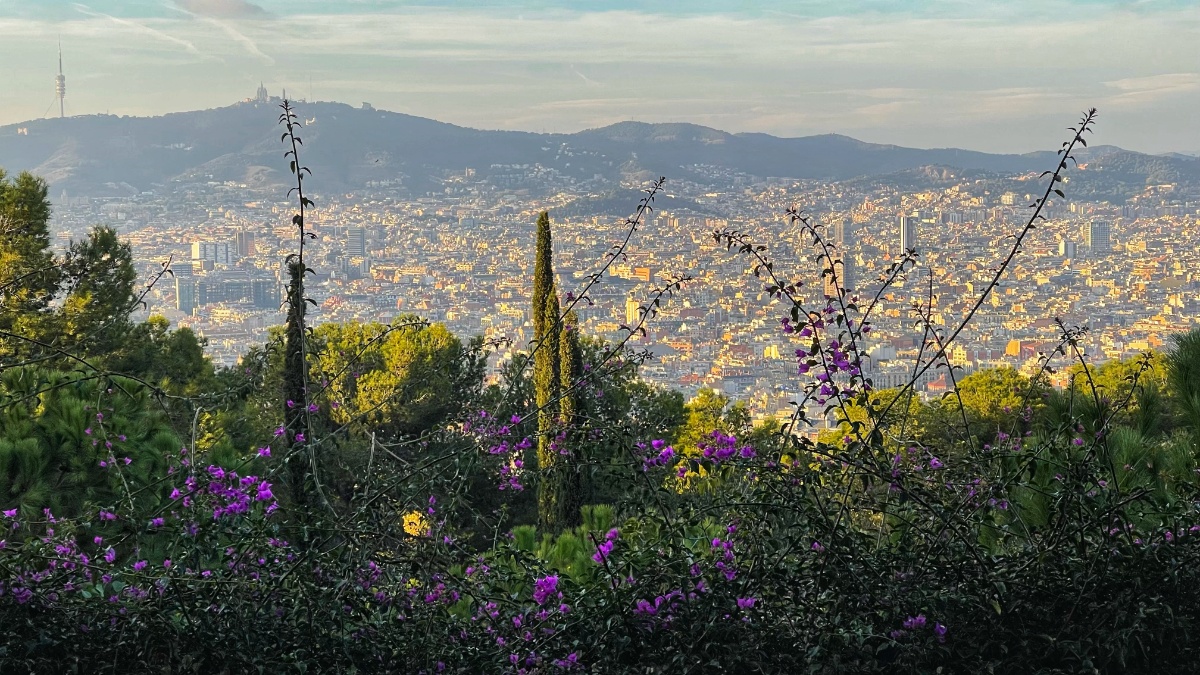 Extending all along the city-facing slopes of Montjuïc are a series of beautiful landscaped gardens and wooded parks that offer a welcome respite from Barcelona’s dense web of streets. Once you’ve made it up the hill from downtown, the most rewarding way to explore the area is on foot. Amongst the lovely gardens that snake between Montjuïc’s monuments and museums are the Jardins del Mirador, opposite the cable car terminus, the sculpture-studded Jardins de Joan Maragall, the Alhambra-inspired Jardins de Laribal and the Jardins de Joan Brossa, where an array of Mediterranean fauna including soaring cypresses and gnarly olive trees frame unbeatable views of Barcelona spreading out far below. 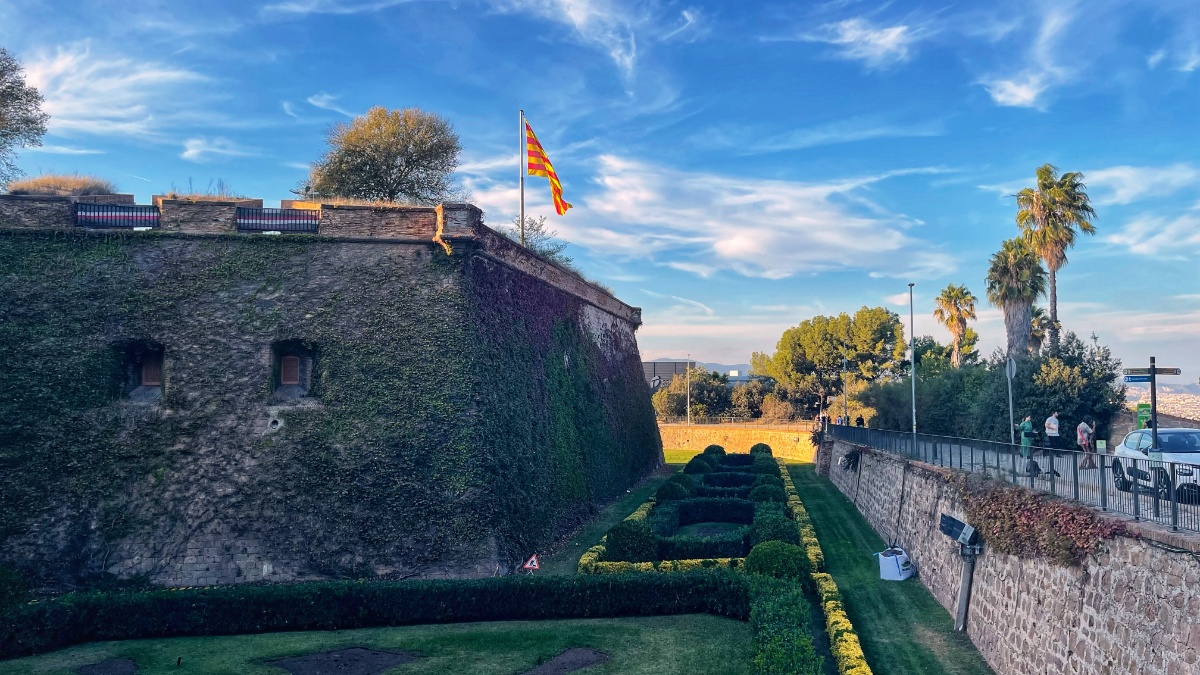 This imposing fortress perches on the highest point of Montjuïc hill, a strategic spot that has ensured the castle’s continuing importance ever since a watchtower was first erected here back in the year 1073. The commanding views over the port from here are unforgettable, but the presence of cannons with muzzles facing out to sea are stark reminders that the Castellan de Montjuïc was for centuries a place of violence and conflict. Amongst the most ignoble chapters  in the castle’s history was the period in the late 19th and first half of the 20th centuries when it doubled as a jail for political prisoners and site of their summary executions, including that of Franco enemy and president of the Catalan Republic Lluis Companys in 1940. After exploring the bastion, make sure to follow the trail around the tip of the promontory for a lovely cliff-edge stroll at sunset.

Enjoy the spectacular display of the Magic Fountain of Montjuïc 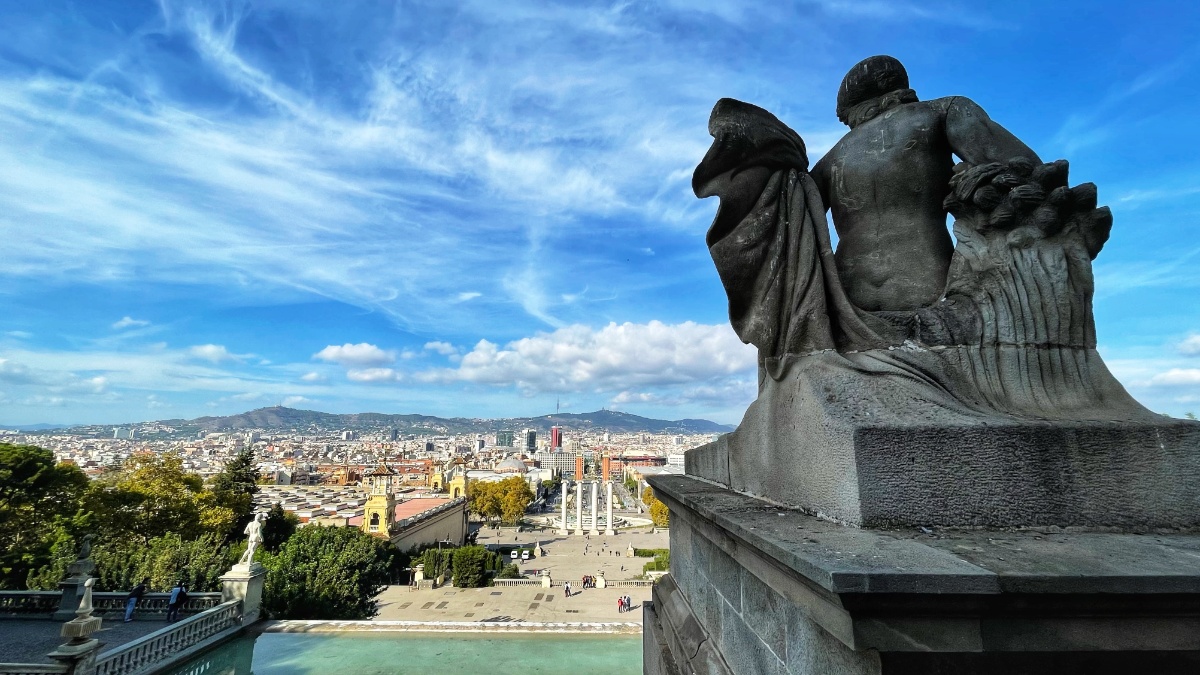 One of the most immediately recognisable sights in Barcelona, the massive Font Magica fountain began life as an installation for the 1929 World's Fair before gaining a new lease of life after a restoration in anticipation of the 1992 Olympics. Each evening the fountain springs to life through barnstorming cascades of water illuminated by colourful lights and accompanied by snatches of music, the whole ensemble theatrically framing the impressive neo-Baroque  form of the Palau Nacional above. The show lasts for 15 minutes, and it’s not to be missed if you find yourself in Montjuïc after dark! 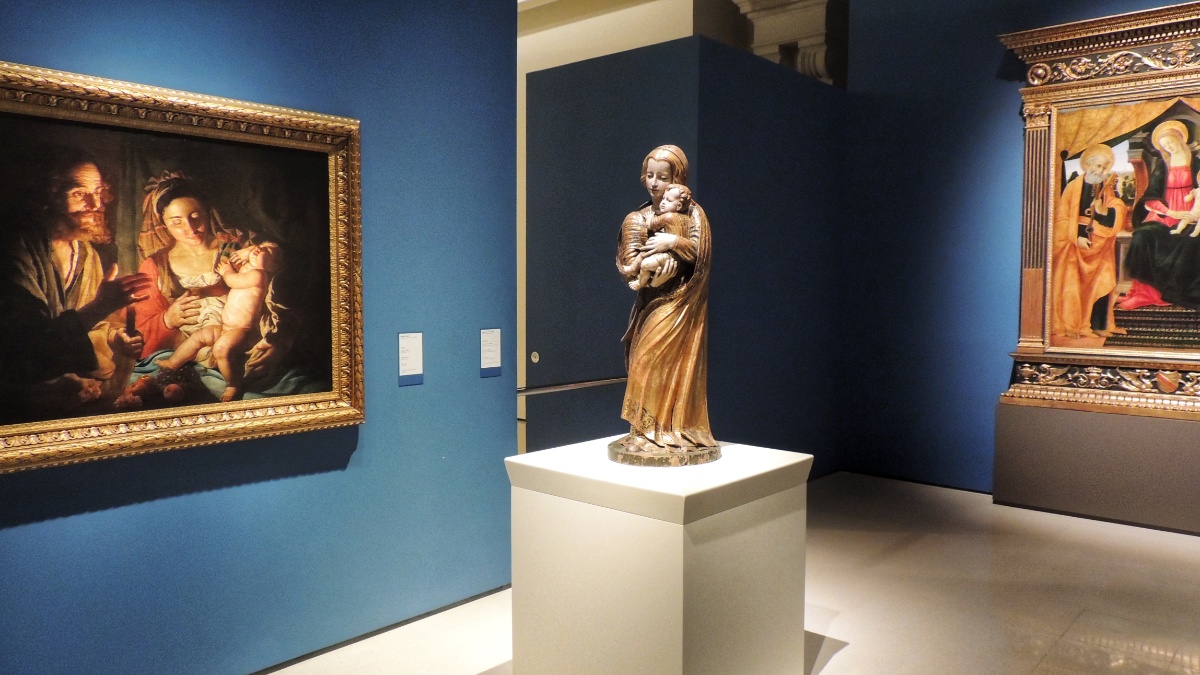 The big daddy of Barcelona’s impressive museum circuit, the Museu Nacional d’Art de Catalunya boasts a superb collection of Catalan art from the religious art of the Middle Ages to the high modernism of the 20th century and everything in between. The gallery is particularly strong on medieval frescoes - the fascinating collection of artworks taken from far-flung and isolated churches all across the region arguably constitutes the most important grouping of Romanesque painting in existence, and provides a unique insight into the highly expressive visual language of the Middle Ages. A number of church chapels have been recreated wholesale within the museum, giving an excellent sense of how the frescoes would have looked in situ. 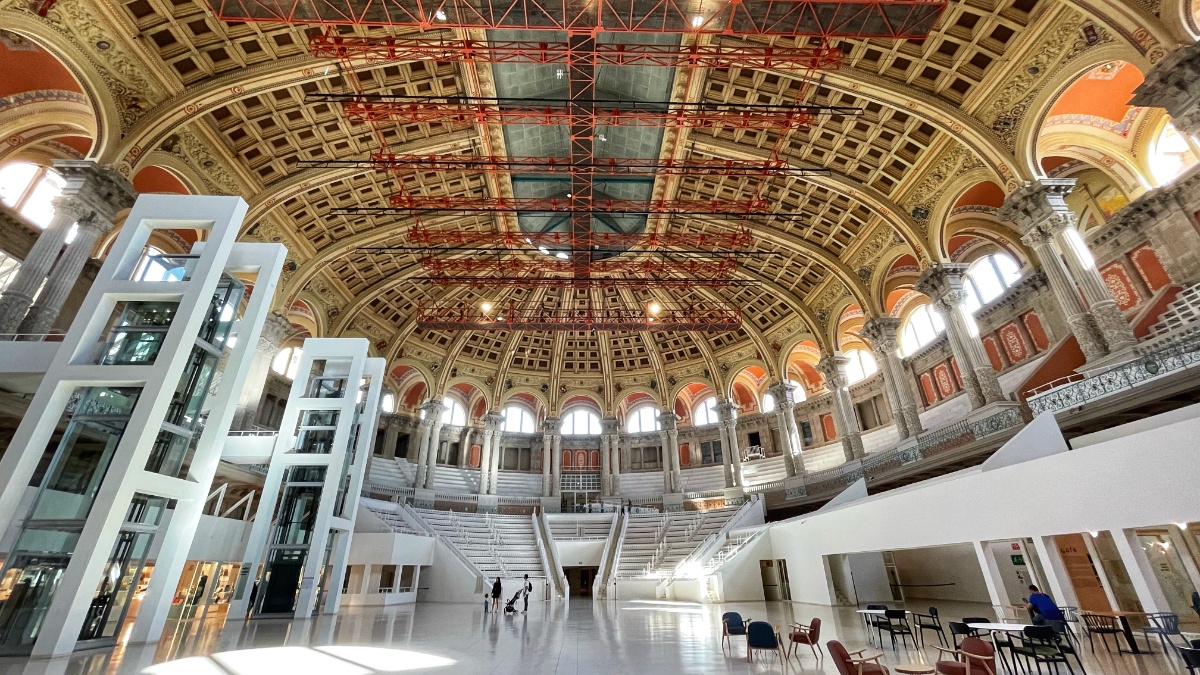 Scarcely less impressive is the Renaissance and Baroque gallery, a recently renovated space that showcases works by Velazquez , Ribera, Zurbaran, El Greco and many others. The Modern Art section upstairs, meanwhile, features an early work by Salvador Dali alongside Miró murals, Republican political posters and objects designed by Antoni Gaudi. The museum building is a delight in itself, a many-domed and turreted neo-Baroque confection visible from all across the city that was dreamed up, once again, for the 1929 Expo and which features a remarkable central hall and a panoramic terrace. 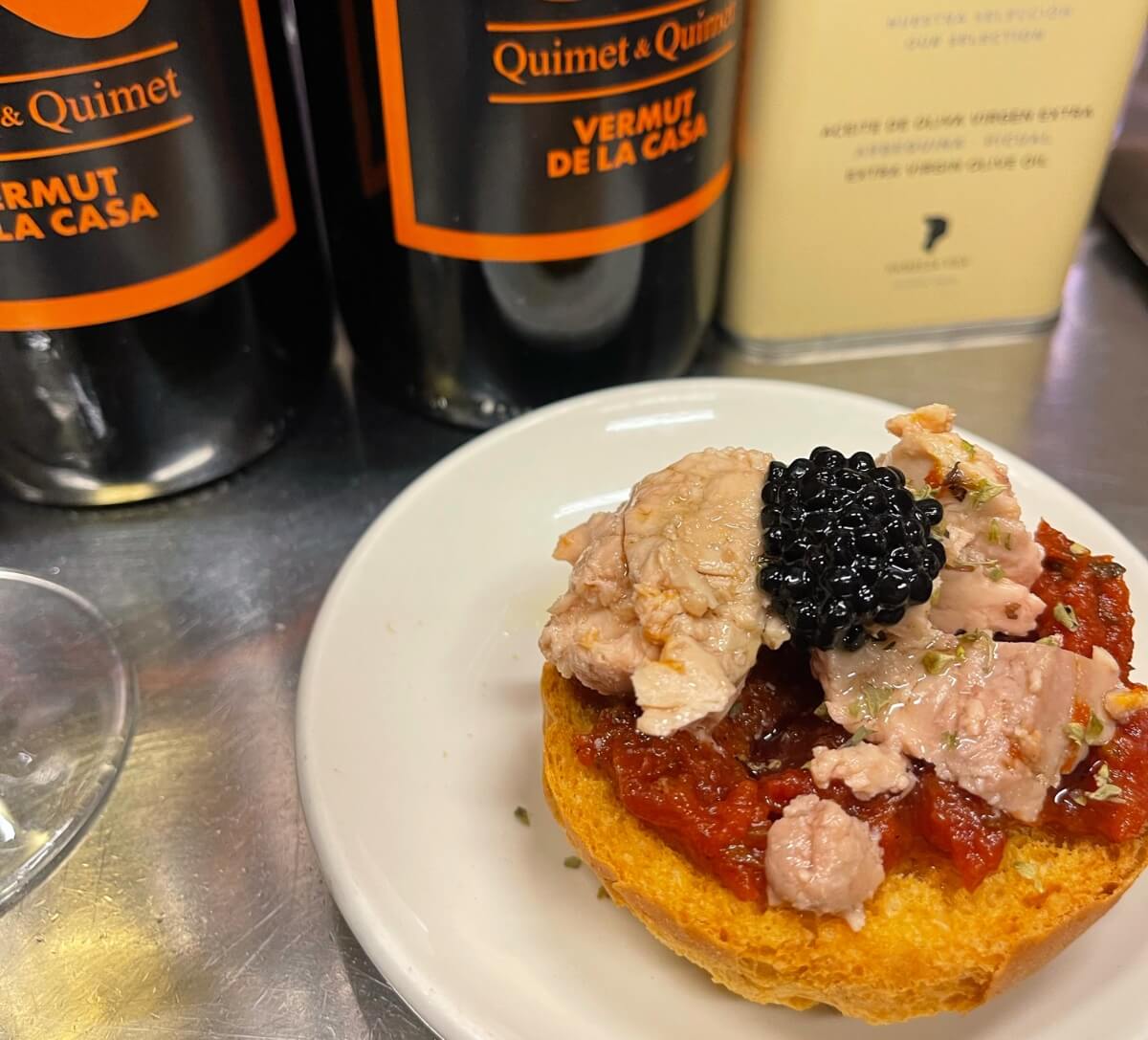 After a long day exploring the museums and gardens of Montjuïc, your dogs will most definitely be barking; what better way to cap off the day than some wine-and-tapas fuelled relaxation? Luckily for you, the Poble Sec and Sant Antoni neighbourhoods located at the base of Montjuïc hill are chock-full of likely watering holes. Hop on the funicular and take the short trip down to the Paral.lel stop, where nearby Quimet i Quimet serves up what for our money are the most mouthwatering innovative small plates in the city. 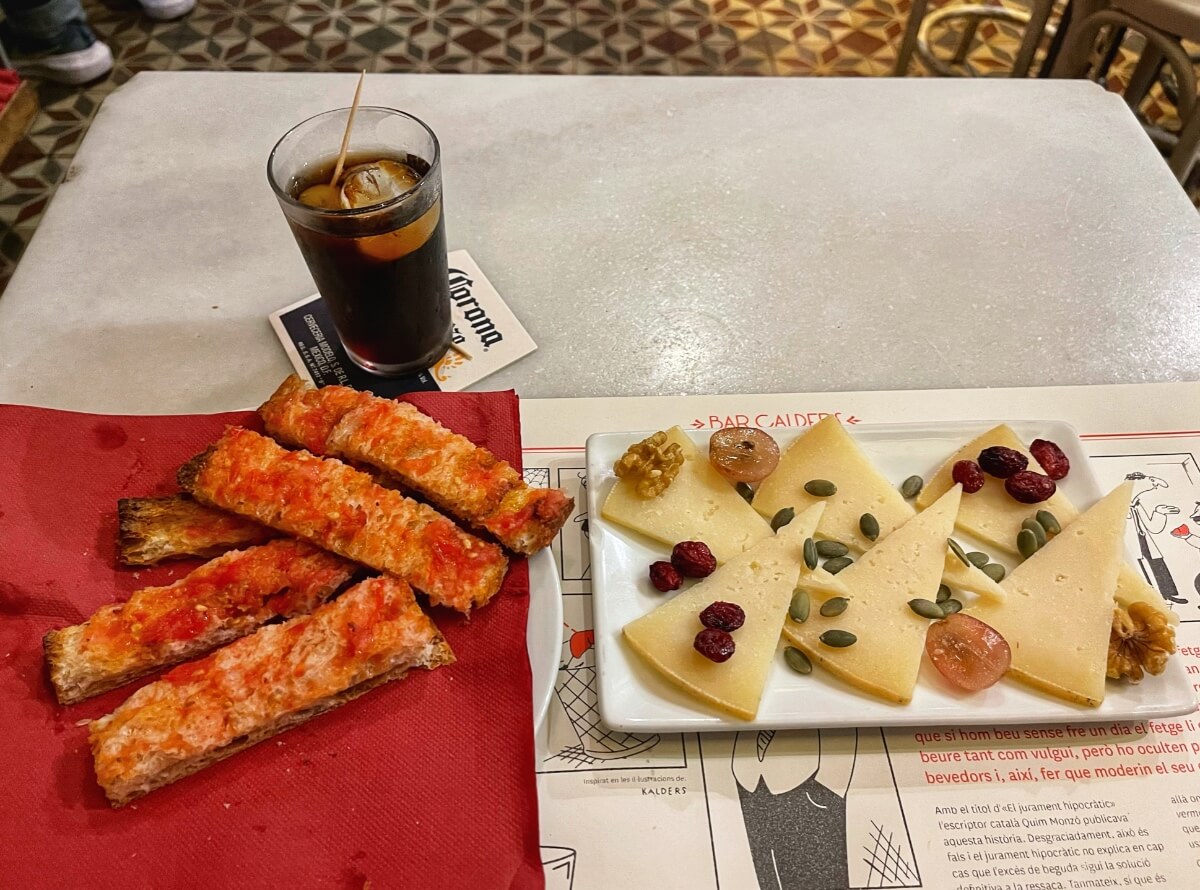 Try classics like razor clams, sardines, or salmon, honey and truffle montadito; if you’re feeling adventurous don’t miss fishy delights like tuna heart with salted almonds or cod’s liver on toast. The bottle-lined space is on the small side of diminutive, and you’ll usually have to wait to get a spot at the bar, but turnover is relatively quick and it’s most definitely worth the wait. Alternatively head to Bar Calders to snack on classic Barcelona tapas like Manchego cheese and Pa amb tomàquet washed down with plenty of house-made vermouth.

Through Eternity Tours visit Montjuïc on our Essential Barcelona and Barcelona in a Day private tours. With expert local guides and private transportation, our personalised Barcelona itineraries are the best way to see the Catalan capital. Check out the full range of our Barcelona tours here!