7 Things to Do and See in St. Mark’s Square in Venice 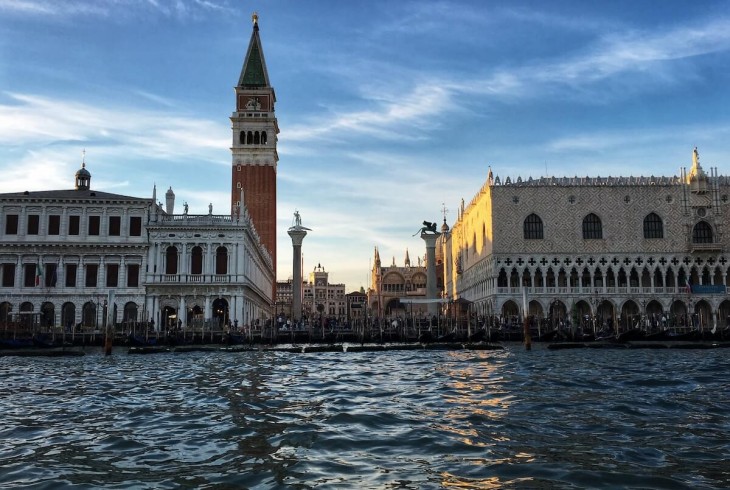 In Venice, all roads (or should that be canals?) lead to Piazza San Marco. This sweeping square has stood proudly at the heart of Venetian life for centuries, and serves as every visitor's principal point of reference when visiting the labyrinthine Serenissima. The piazza’s spectacular architecture, with the elegant arcades of the Procuratie Vecchie and Procuratie Nuove lining both sides and the spectacularly exotic, almost other-wordly form of Saint Mark’s basilica gleaming at the far end, will be sure to live long in your memories of Venice. But there’s a lot more to Venice’s premier public space than first meets the eye; read on to discover what you need to see and visit when in Saint Mark’s Square! 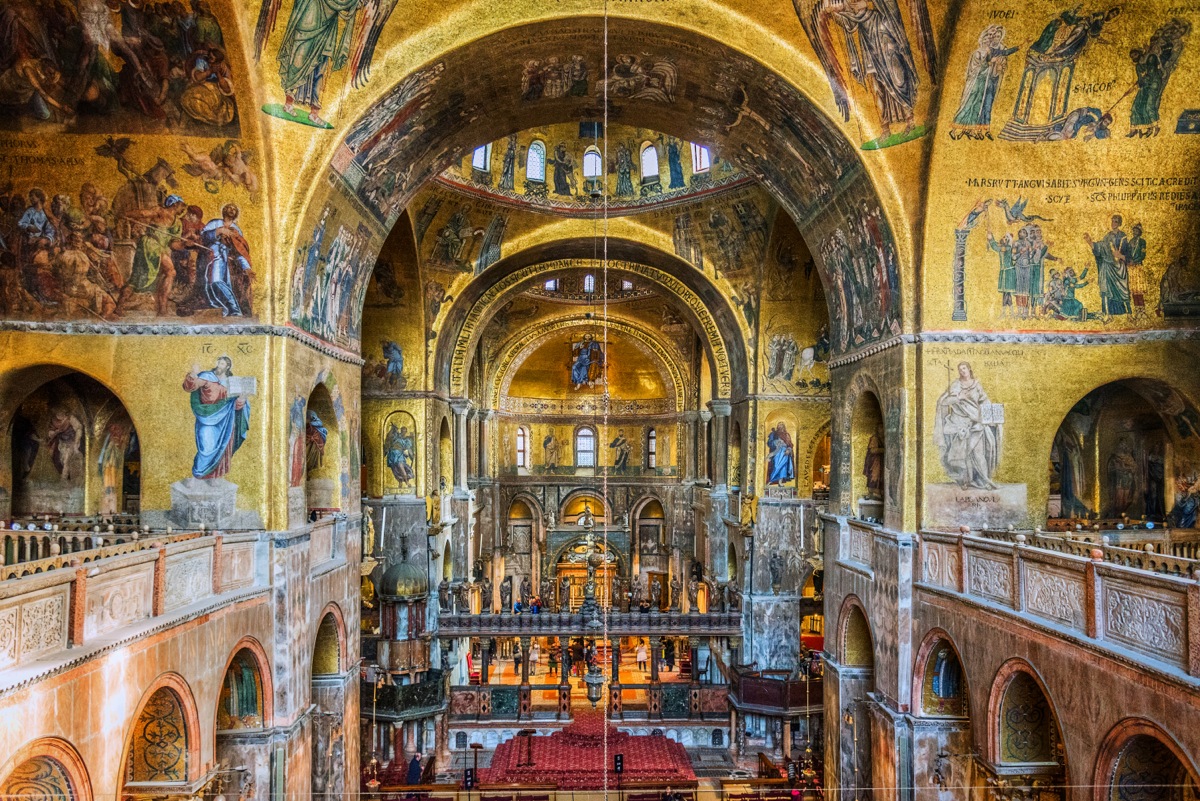 Dominating the piazza to which it gives its name, Saint Mark’s basilica is one of the world’s greatest churches. With a history stretching back over 1,000 years, the sprawling cathedral encapsulates the mysterious charm and eccentric beauty of Venice in microcosm. After Venetian sailors stole the body of the apostle Saint Mark from Egypt in an audacious 9th-century heist, the city determined to construct a site of worship befitting the elevated status of their adopted patron saint. The resulting church is so beautiful that no photos can do it justice, and its glittering array of domes, turrets, arches and gables is a fusion of eastern and western architecture that reflects the Serenissima’s cosmopolitan heritage.

Step inside Saint Mark’s basilica for a real visual treat: over 4,000 square metres of fabulous mosaics shimmer from every surface, transforming Venice’s most famous church into a vision of heaven. Not for nothing is San Marco known as the chiesa d’oro - the church of gold. The mosaics are the fruits of many centuries of labour from the early Middle Ages up to the Renaissance and beyond. Other masterpieces in the church include the medieval Pala d’Oro - a priceless Byzantine altar studded with precious stones.

Entrance to the church is free, but be prepared for long queues during summer and at peak hours throughout the year. Your best bet is to arrive in the early morning, before the church opens at 9.30 am, or alternatively join a tour that will allow you to skip the lines. Through Eternity offer an exclusive after-hours visit of Saint Mark’s basilica that will enable you to avoid the queues and the crowds as well as visiting areas of the cathedral that are usually closed to the general public. 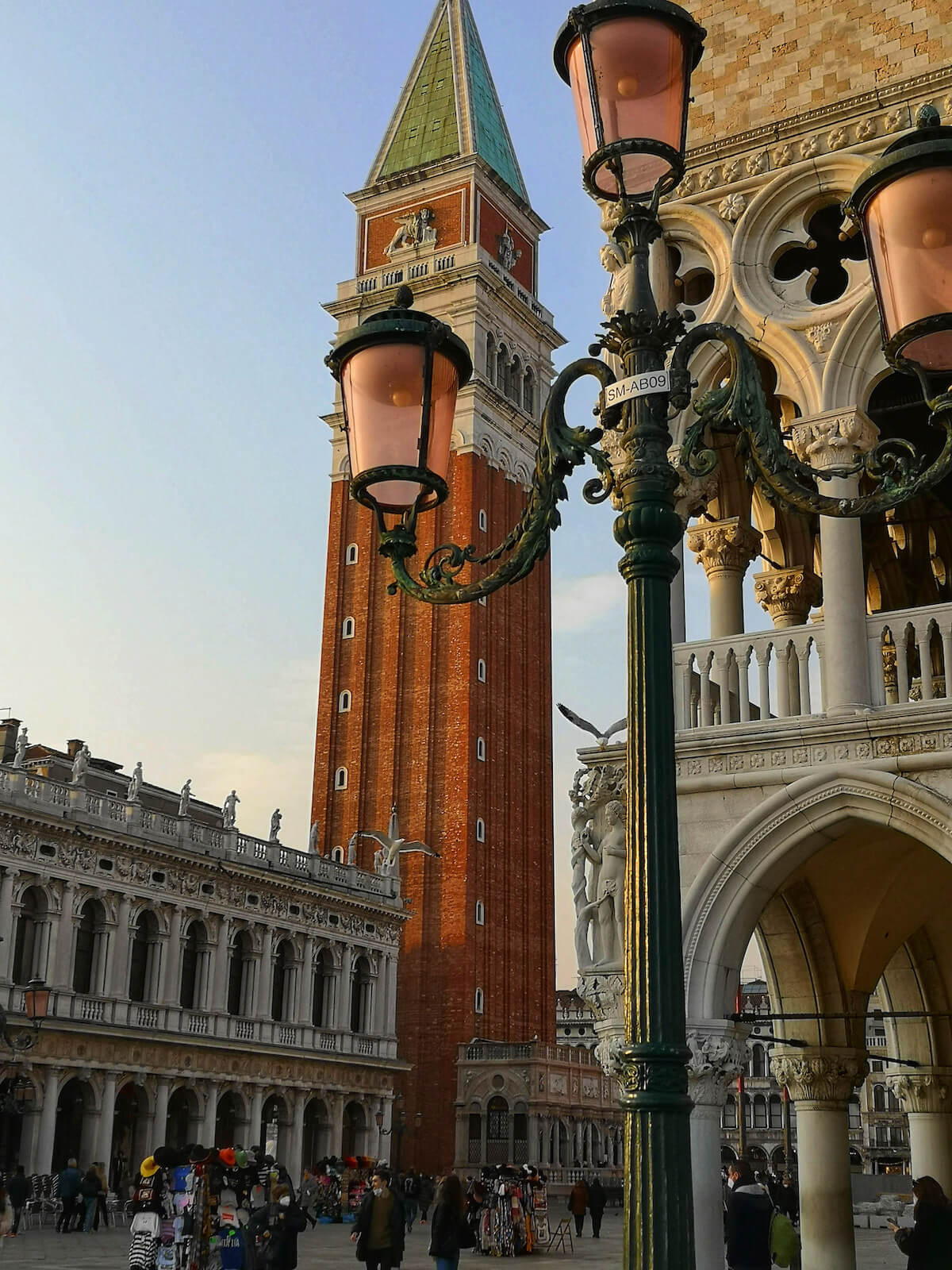 At 98.6 metres high, the brick Campanile di San Marco is Venice’s tallest building. This is the bell tower of Saint Mark’s Basilica, which once doubled as a lighthouse to guide ships to the mouth of the Grand Canal, and the current design dates from 1515. The actual tower that we see today is in fact an exact replica of the original, built in 1912  after the tower collapsed in 1902. At the top of the tower a golden statue of the archangel Gabriel stands silent watch over the sprawling Floating City below, whilst five bells are located in the belfry.

The chiming of each bell historically signified something different to Venetians: the largest of the bells, known as the Marangona, rang twice a day to signal the beginning and end of the working day. The Nona peeled each midday; The Trottiera called members of the Maggior Consiglio to council sessions, whilst the Mezza Terza chimed when the Senate was sitting. The smallest of the bells is also the most foreboding: the peeling of the Malefico meant that a public execution was imminent.

When in Venice make sure to climb up the campanile (tickets €8) for spectacular views across the city and its endless canals from the observation deck above. If you’re not feeling energetic, then fear not - a lift will whisk you easily to the top.

Take a spill at a historic cafe 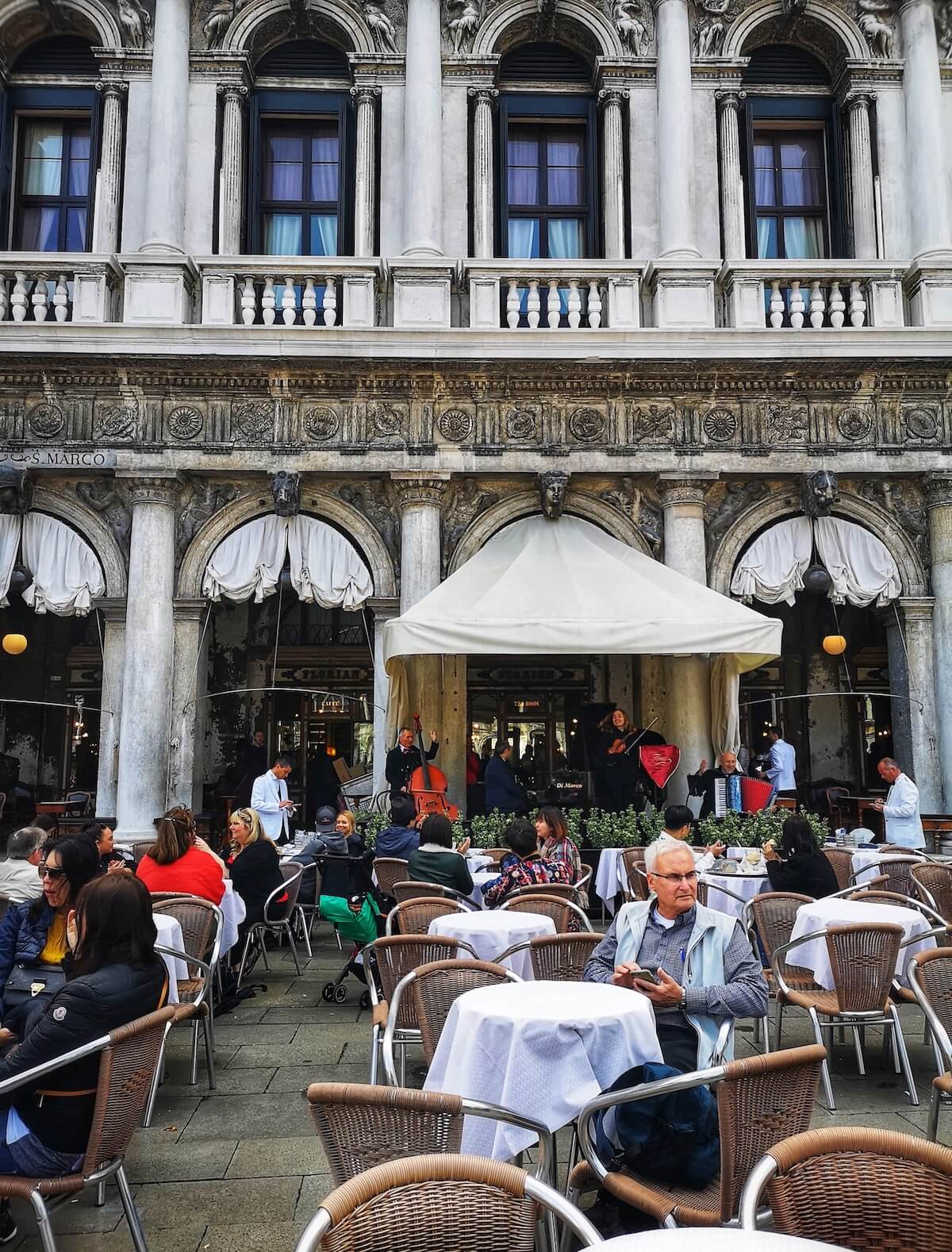 Napoleon famously dubbed Piazza San Marco as the ‘drawing room of Europe,’ and today the sweeping square remains one of the best places for people watching anywhere on earth. There’s no better way to drink in the atmosphere of Venice than by stopping off at one of the piazza’s two historic cafes - Caffe Florian and Caffe Quadri have been on the go since the 18th century, and both provide oodles of old-world charm.

Caffe Florian was founded in 1720 to feed Venice’s growing appetite for coffee, imported from the Ottoman Empire by enterprising Venetian merchants, and its gleaming interior of mirrors and stuccoes, of marble and crisp white tablecloths, has played host to luminaries from the art world and high society (Florian was a favourite of the Romantic poets Byron and Shelley, as well as local lothario Casanova) for over three centuries. The live orchestra that serenades guests on the outdoor terrace only adds to the atmosphere. Opulent Cafe Quadri meanwhile is the epitome of Belle Epoque good taste, and its interior stuffed with antique furniture as well as paintings by Pietro Longhi and Giuseppe Put will transport you back in time to Venice’s Golden Age.

Escape the crowds at the Correr Museum

When the crowds thronging Piazza San Marco get too much, then head to this fascinating museum located at the west end of the square. The building began life when Venice was under Napoleonic rule in the first decade of the 19th century, and was initially intended as a palatial new residence for the French sovereign. The opulent palace served as the official residence of the Hapsburg Court when the city subsequently became part of the Austrian empire, and today offers visitors a splendid window into the refined and elegant world of 19th-century Venetian high society. A series of grand reception rooms, staircases and ballrooms are all beautifully decorated in neoclassical style, whilst artefacts, artworks and displays offer a crash course in Venetian history. A fine permanent collection of paintings as well as regular exhibitions makes the museum well worth a visit when in Venice.

Get to know some very special horses 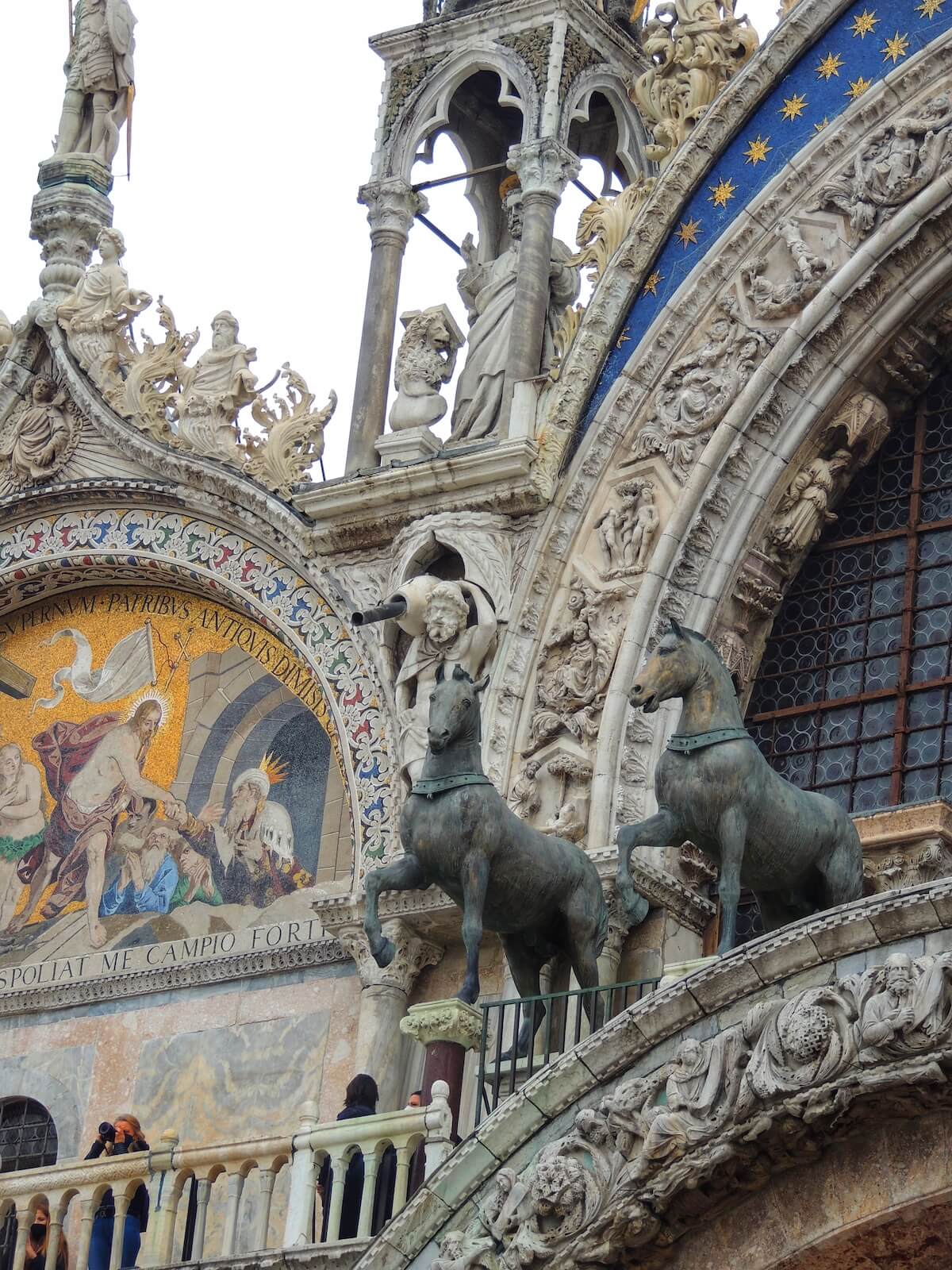 Amongst the many beautiful features of the facade of Saint Mark’s basilica, visitors are sure to notice the four magnificent bronze horses that seem poised at any moment to gallop off the church’s loggia and into the square below. Known as the Cavalli di San Marco in Italian, these horses originally formed part of an ensemble depicting a quadriga (an ancient racing chariot). Their provenance is uncertain, but given their size and quality it’s likely that the horses originally graced an imperial monument in Rome before being transported to Constantinople during its rise to prominence in late antiquity.

There they were displayed in pride of place at the Hippodrome of Constantinople for centuries until being looted by Venetian soldiers when the city was sacked in 1204 during the fourth crusade. Powerful Doge Enrico Dandolo had them installed on St. Mark’s facade in 1254, where they remained until once more being looted, this time by Napoleon, who had them carted off to Paris in 1797 to adorn the Arc de Triomphe du Carrousel. Finally restored to the Serenissima on the emperor’s defeat in 1815, the horses were moved inside the basilica in the 1980s for conservation reasons and replaced with exact replicas. What a dramatic life these noble steeds have led over the past 2,000 years!

Look out for the Lions

Horses aren’t the only form of animal life you should be on the lookout for in Piazza San Marco. Saint Mark himself is traditionally most associated with the lion, his apostolic emblem, and if you know where to look you’ll see depictions of nature’s most formidable feline all across the Floating City. Direct your gaze upwards to the top of one of the two granite columns that soar skywards from the square and you’ll spy a magnificent winged lion in bronze.

This exotic beast was probably sculpted as far back as 300 BC, possibly for a monument to the Hittite god Sandas or another pre-Christian near eastern deity. Sometime in the Middle Ages the sculpture was modified and took on its current identification with Saint Mark. Another winged lion stands atop the piazza’s clocktower. On the north side of the square, meanwhile, in the so-called Piazzetta dei Leoncini, two beautiful red marble lions greet visitors as they arrive in Saint Mark’s Square, their backs worn smooth from generations of children sitting on them 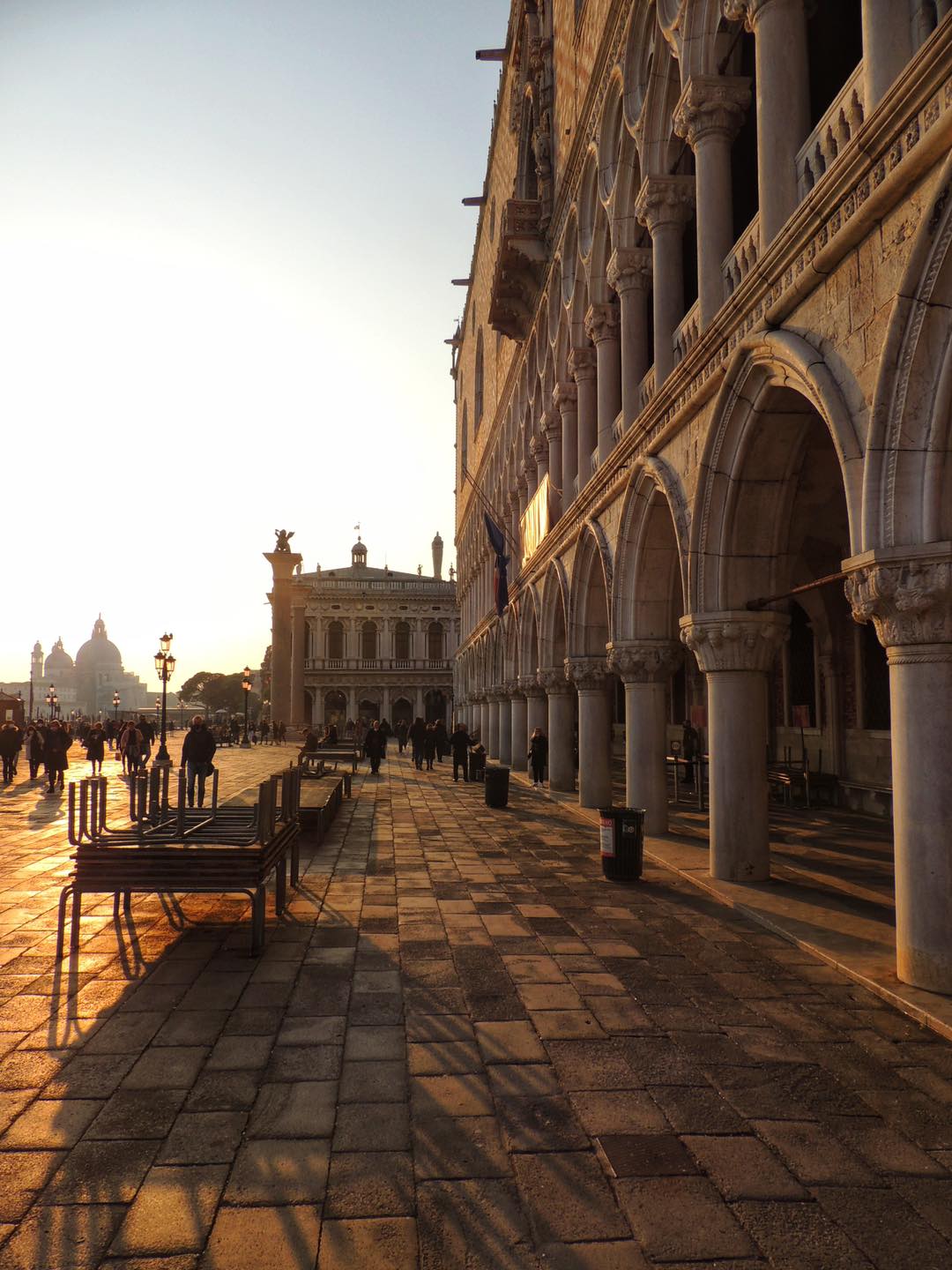 At the far end of Saint Mark’s Square heading towards the waters of the Venetian Lagoon is the Piazzetta San Marco, home to one of the city’s most important buildings. Enviably sited along the waterfront, this masterpiece of Gothic architecture constituted the political epicentre of the Venetian Republic. As its name implies, the Doge’s Palace was the official residence of the ruling Doge of Venice. The hypnotic rows of pink-tinged arches date from the 1300s, and are a truly spectacular sight as the sun begins to set over the water. Inside, a series of massive state rooms, lavish private apartments, various courtrooms, assembly halls and prisons provide a vivid insight into the complex bureaucracy that was required to keep one of the world’s most powerful maritime superpowers running like clockwork for centuries. 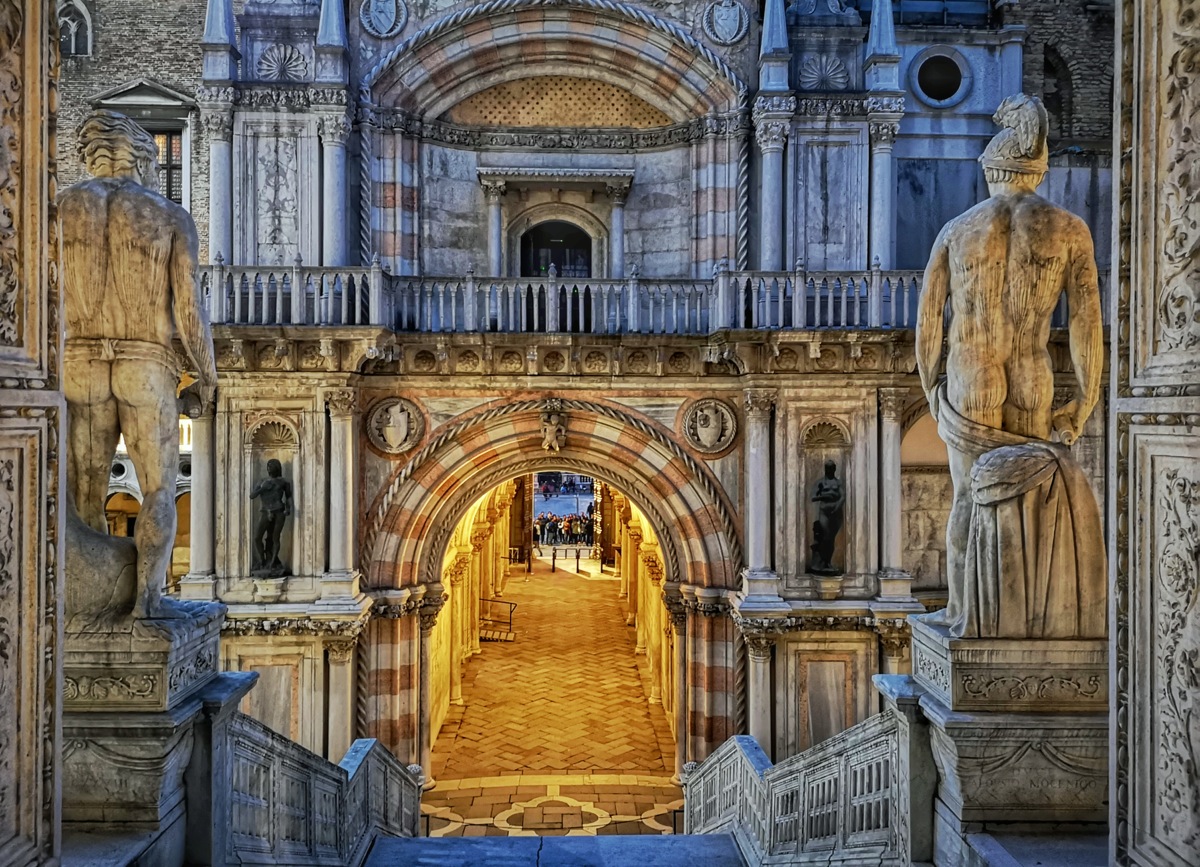 A visit to the Doge’s Palace is a must when in Venice: highlights include Jacopo Sansovino’s Scala d’Oro, a lavish golden staircase that led to the Doge’s living quarters, as well as the Chamber of the Great Council: one of Europe’s largest rooms, important assemblies and meetings of the Venetian Republic took place here beneath fabulous paintings celebrating the might of Venice. Other rooms are home to more glorious examples of Venetian art: Veronese’s Juno Bestowing Her Gifts on Venice provided the backdrop for the scheming of Venice’s ruling council of ten in the Sala Consiglio dei Dieci, whilst works by luminaries like Titan, Tintoretto and Tiepolo light up further chambers. The grandiose 15th century Scala dei Giganti, meanwhile, is one of Italy’s most beautiful staircases.

Through Eternity Tours offer a range of expert led Venice small group tours and private itineraries, from tours of Saint Mark’s basilica and the Doge’s Palace to off-the-beaten track sites and visits to the islands of the Venetian lagoon. Check out our Venice tours page for more, and get planning your perfect trip to the Floating City! 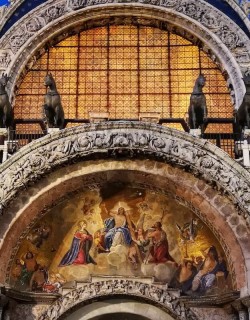