Beyond Michelangelo: 5 Things You Might Not Know About the Sistine Chapel 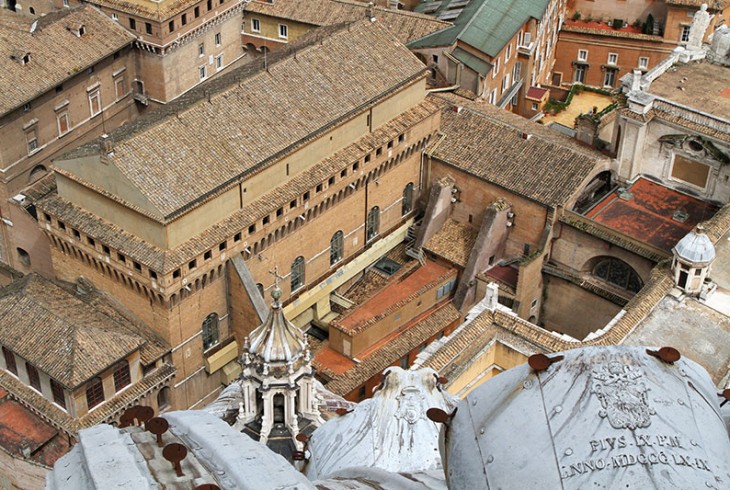 If you come to Rome, you’ll almost certainly be visiting the Sistine Chapel. Every day around 25,000 people make their way through the Vatican Museums to the world’s foremost temple of art, eager to see for themselves the iconic frescoes that Michelangelo painted here more than 500 years ago. But there’s a lot more to the Sistine Chapel than the extraordinary crowning achievement of Michelangelo’s career. Check out our countdown of 5 things you might not know about the Sistine Chapel! 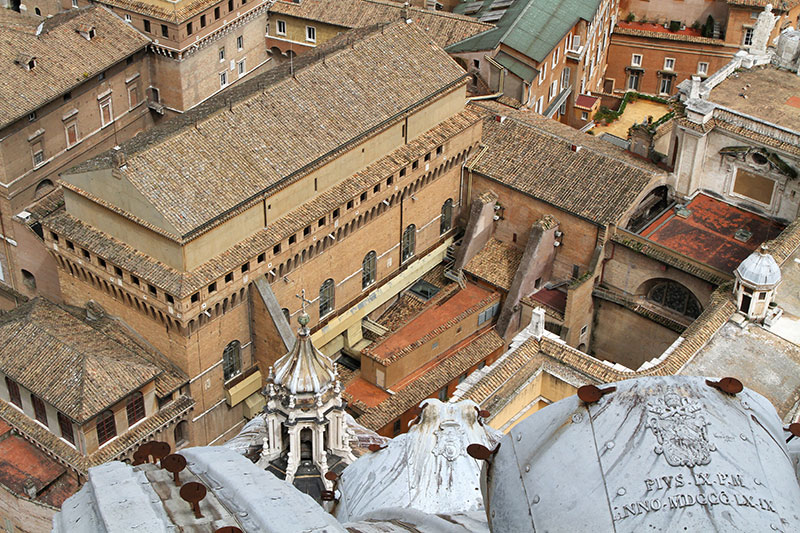 If you’ve seen a photo of the Sistine Chapel from the outside, you will probably have been struck by just how austere it is – an imposing crenelated rectangle of massively thick and undecorated brick walls, supported by stout buttresses. In fact it looks more like some medieval castle than one of the most precious jewel-boxes of Western art. There’s good reason for this – when Pope Sixtus IV commissioned the Sistine Chapel to be built between 1475 and 1481 to designs by Baccio Pontelli, he wasn’t just seeking a sacred space where masses and important ecclesiastical decisions could play out to the backdrop of beautiful artworks.

No, Sixtus also had his own personal safety firmly in mind. In the tumultuous and war-torn 15th century, the pope wanted his chapel to double as a defensive bastion, an impregnable fortress within the Vatican walls that could hold firm in the event of attack. Replacing the medieval Cappella Magna that once stood on the same site (and which also had a dual defensive-sacred function), the Sistine Chapel became the biggest and most defensible building in the entire Vatican complex. Like today there was no external access to the chapel, with the only ingress via the interior of the Vatican palaces, and the imposing fortress also commanded excellent views of the surrounding countryside from its protected rooftop walkway – meaning the papal troops would be aware of any impending trouble in the hinterlands. 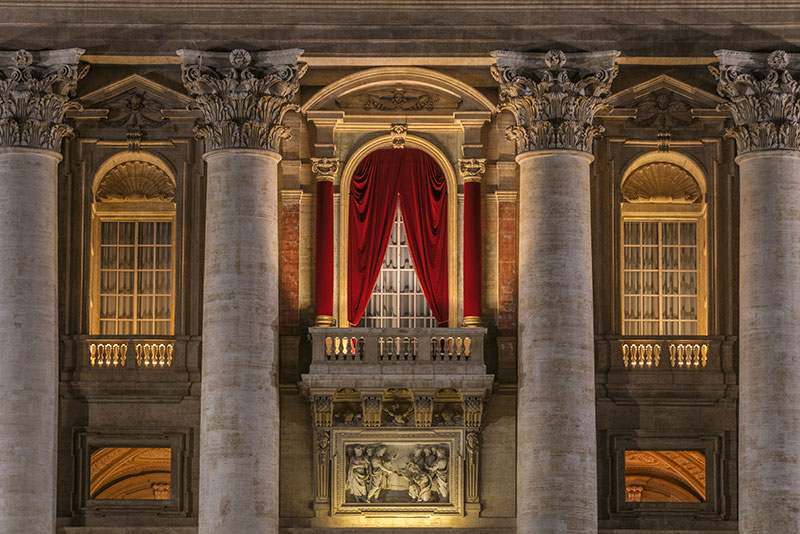 2 - Habemus Papam: the Sistine Chapel is where popes are elected

The Sistine Chapel forms the spectacular setting for the most important decision-making process in the Catholic world. Every time a pope dies (or in the most recent case resigns), the college of cardinals gather here after 15 days of mourning to elect his successor from their own ranks. Technically any Catholic male is eligible for election, but in practice only one of the cardinals taking part in the conclave will be chosen to occupy the vacated seat of St. Peter. The cardinals who are considered to be in with a fighting chance are known as the papabili, or the ‘Pope-ables’.

If you’ve seen the Dan Brown knockabout Angels and Demons you’ll know the sede vacante drill, which it represents surprisingly (considering the rest of the movie) accurately. The cardinals arrive from all over the world to take part in the conclave, and they really do have to consign their mobile phones into the care of custodians before entering the chapel – what happens in conclave stays in conclave. Keeping up with the times, the cardinals are even obliged to swear an oath that they won’t reveal events behind the closed doors on Twitter, Facebook or anywhere else. Once the cardinals are all safely seated within, the doors are sealed shut and no-one goes home until a two-thirds majority consensus is reached. After each round of voting the used ballots are tossed into a stove and burned. The faithful gathered in St. Peter’s square in anticipation of the announcement are notified of the outcome by the resulting smoke - if there is a deadlock chemicals are added to make the smoke burn black, whilst white smoke heralds the election of the new pope.

Pope Sixtus sought an elevated pedigree for the crowning achievement of his reign, and he found it in the model of the ancient Temple of Solomon built in Jerusalem in 966 B.C. as outlined in the Hebrew Book of Kings. Both structures are twice as long as they are high, and three times as long as they are wide. But whereas Solomon’s temple was covered with cedar and gold, amongst the most precious materials known to the ancient world, the Sistine Chapel was covered with the most valuable intangible commodity of the Renaissance – the painted creations of its greatest painters.

During the first campaign of decoration the finest artists of Tuscany and Umbria descended on Rome to play their part, including Botticelli, Perugino and Ghirlandaio, whose beautiful frescoes depicting the lives of Moses and Jesus stretch all along the side walls of the chapel. To make the link between the Sistine Chapel and the Temple of Solomon explicit, Perugino’s fresco of Christ giving the keys to St. Peter makes explicit reference to Solomon’s temple in an inscription. 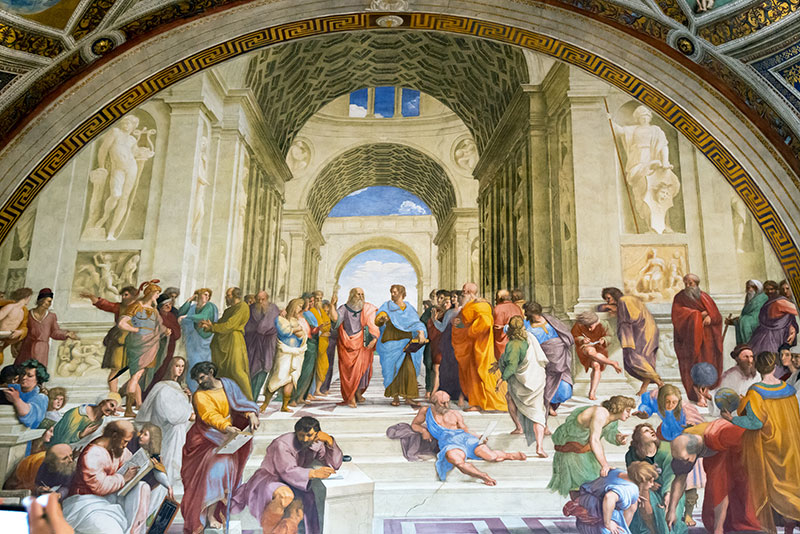 4 - For 6 years, Raphael and Michelangelo’s works stood side by side here

25 years later and it was the divine Michelangelo’s turn to do his bit, reluctantly painting the entire ceiling of the Sistine Chapel between 1508 and 1512 at the behest of the fearsome warrior-pope Pope Julius II. But you might not know that Michelangelo wasn’t the only great master of the High Renaissance to leave his mark here. In 1515 Pope Julius’ successor Leo X decided he wanted to put his own stamp on the Sistine Chapel, and he was willing to pay top-dollar for it. And so he decided to commission from Raphael the designs for a series of massive tapestries portraying the Acts of the Apostles Peter and Paul, which would be woven by the world’s finest weavers in the Brussels workshop of Pieter van Aelst. The resulting tapestries cost an eye-watering 16,000 ducats – more than five times what Julius paid for Michelangelo’s ceiling! Seven of the tapestries were displayed for the first time on December 26th 1519, and this was to be the only time Raphael saw the finished works in situ - the entire series was only completed a year after his premature death in 1521.

For six years the works of the two greatest masters of the age were displayed in direct competition, but the priceless tapestries weren’t to last long in their new home. During the devastating Sack of Rome in 1527, they were carted off as valuable booty or pulled apart for their precious gold threads. Amazingly most have made their way back to the Vatican over the years, and in 1983 they were displayed in the Sistine Chapel for the first time in over 450 years. They now hang in the protective environment of the Pinacoteca. The cartoons (massive preparatory paintings made by Raphael for the weavers to work from) quickly became amongst the most revered works of Renaissance art, and are displayed in pride of place today in London’s Victoria and Albert Museum. 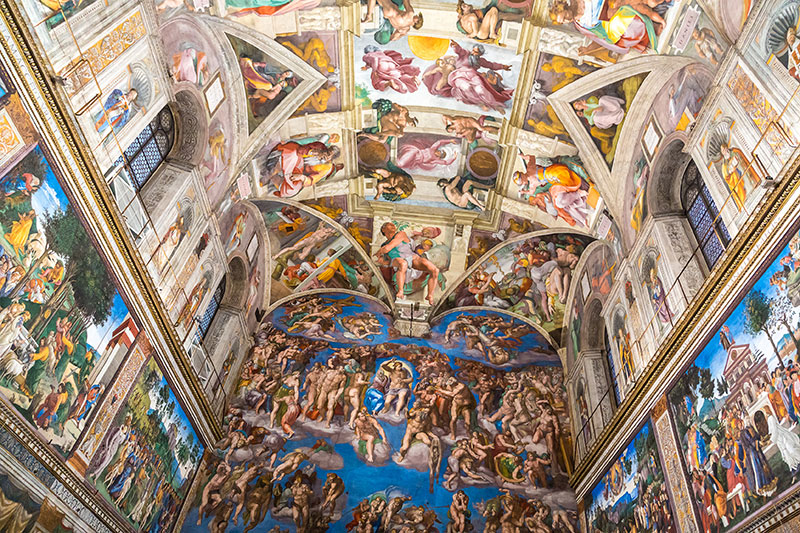 Between 1536 and 1541 the aged Michelangelo returned to the Sistine Chapel one final time, frescoing the altar wall with a massive apocalyptic vision of the Last Judgement where the saved are carried to heaven on the wings of angels, and the damned dragged downwards to hell and eternal torment. For Michelangelo, the nudity of his beautiful figures was fundamental both to his artistic vision and spiritual values, and plenty of his contemporaries agreed - foremost amongst them his fellow artists and patrons who recognised the epoch-defining nature of his work.

But as the cultural climate in Rome grew more conservative in the wake of the Reformation and the Catholic response in the Counter-Reformation, artworks like Michelangelo’s came to be seen as symbols of all that was wrong with a worldly church, and were ripe targets for Protestant criticisms of Catholic excess. Closer to home, the Pope’s master of Ceremonies Biagio da Cesena thought that Michelangelo’s paintings were fit only for the walls of a brothel, and the poet and satirist Pietro Aretino went even further, declaring that even brothel-dwellers would blush at the sight of the Last Judgement - quite a claim given Aretino’s role as the Renaissance’s most prominent pornographer!

Hypocrisy notwithstanding, the die was cast for the nude saints. Pope Paul IV, notorious for allegedly castrating ancient statues in the Vatican collections, wanted the altar wall whitewashed. Thankfully his plan fell through; a compromise was reached under his successor Pius IV, who had Michelangelo’s friend and protégé Daniele da Volterra veil the saints’ unmentionables with loincloths and draperies the year after the old master’s death. History was unkind to Daniele, conferring upon him the nickname ‘Il Braghettone’, or the breeches-maker – but in reality he saved the fresco from destruction with his relatively unobtrusive coverings. When the fresco was restored in the 1990s, off came the majority of the modesty-protecting draperies, and the striking saintly bodies were revealed once more in all their original glory, in which guise you can see them today!