8 of the Best Places to See the Sunset in Rome 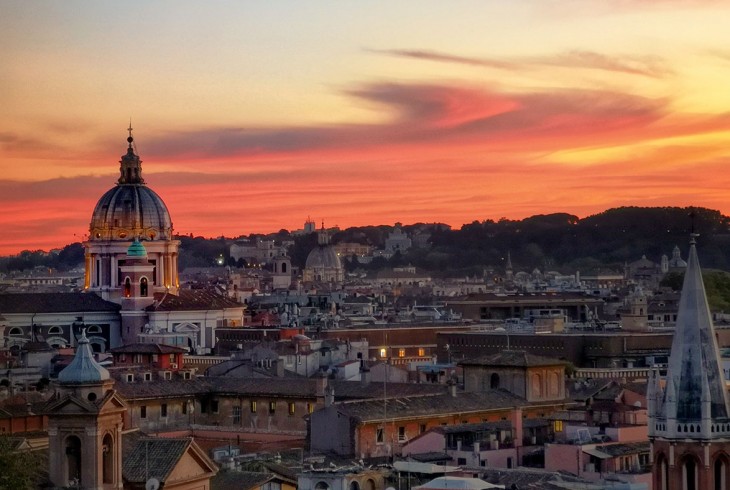 Rome at the golden hour...There’s nowhere in the world quite like the Eternal City when the sun starts making its lazy way westwards towards the horizon.  The great Argentinian writer Jorge Luis Borges once wrote that ‘no one can behold the Roman evening without growing dizzy,’ and when you gaze upon the dazzling drama of golden light painting the city’s rich tapestry of palaces and churches, domes and monuments in vibrant shades of red and orange, you’ll see exactly what he meant. What’s more, Rome is famously a city of hills - meaning there’s no shortage of panoramic vantage points from which to drink in the jaw-dropping spectacle. But where are the best places to watch the sunset in Rome? Read on for our guide to eight of our favourite twilight haunts in the city! 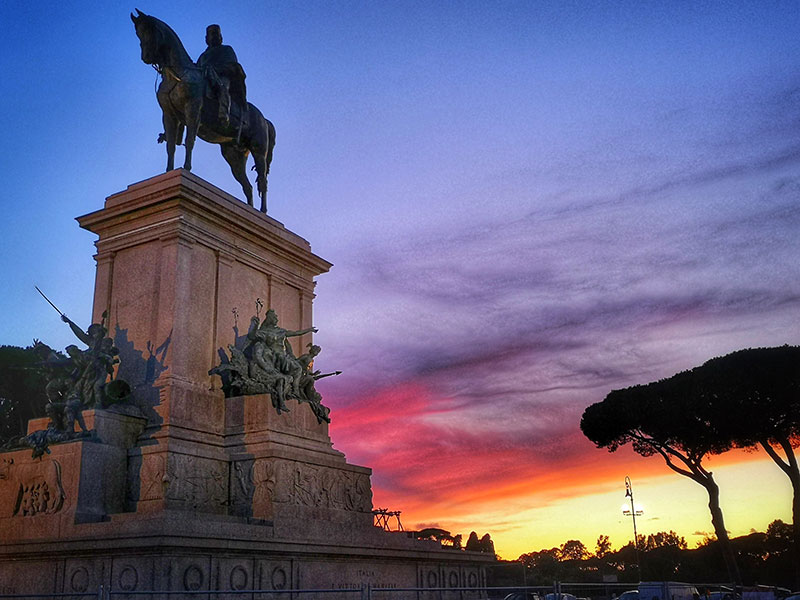 Ask any Roman where they go to watch the sunset, and the Passeggiata del Gianicolo will feature near the top of most lists. A spectacular tree-lined avenue along the top of the hill that hugs the Tiber’s western bank, the Gianicolo is studded with panoramic terraces, a sculpture garden dedicated to the heroes of Italian unification who fought in this very spot, a lighthouse (a somewhat eccentric gift to the people of the landlocked capital from the Italian residents of Argentina in 1911), and even a cannon that fires off a deafening round to mark noon each day. Best of all, the views down to the Tiber and all across the monuments of the city below are truly spectacular - especially when the sky lights up in a thousand shades of fiery red, haloing the massive Vittoriano monument off in the distance.

How to Get There: To walk the entirety of the Gianicolo, climb up the Salita di Sant’Onofrio off Piazza della Rovere just to the southeast of Piazza San Pietro. Once you get to the top, simply follow the Passeggiata del Gianicolo all the way to its southern end just over a kilometre away at the Acqua Paola fountain. 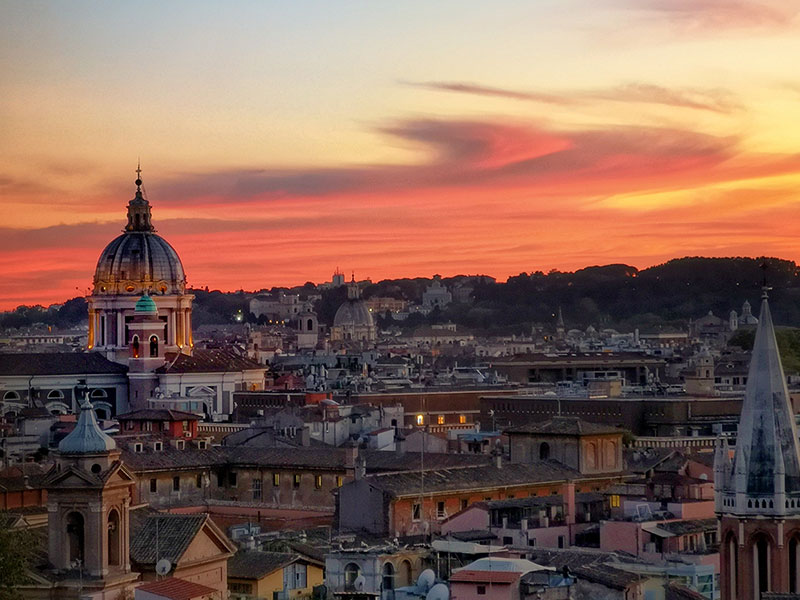 Across the city from the Gianicolo, the terrace of the Pincian hill is a worthy rival for Rome’s most spectacular sunset panorama. Spend an afternoon wandering through the pastoral charms of the Villa Borghese and admiring extraordinary artworks on a Borghese Gallery tour, then reach the Pincio terrace at its western edge to drink in the spectacle of Rome at the golden hour. From here you can admire a stunning birds-eye perspective of Piazza del Popolo far below, not to mention the thick forest of domes, roofs and spires of the city centre as they spill westwards towards the Tiber – culminating in the dome of St. Peter’s beyond, dramatically wreathed in a halo of fire off in the distance. If you’re in the mood to splurge, nab a table on the Casina Valadier’s well-heeled terrace for a sunset aperitivo to match any in the world.

How to Get There: If you’re in the Villa Borghese park, simply head to its eastern edge to see the panorama open up before you. If you are in central Rome, climb up the steps from Piazza del Popolo or the Spanish Steps. 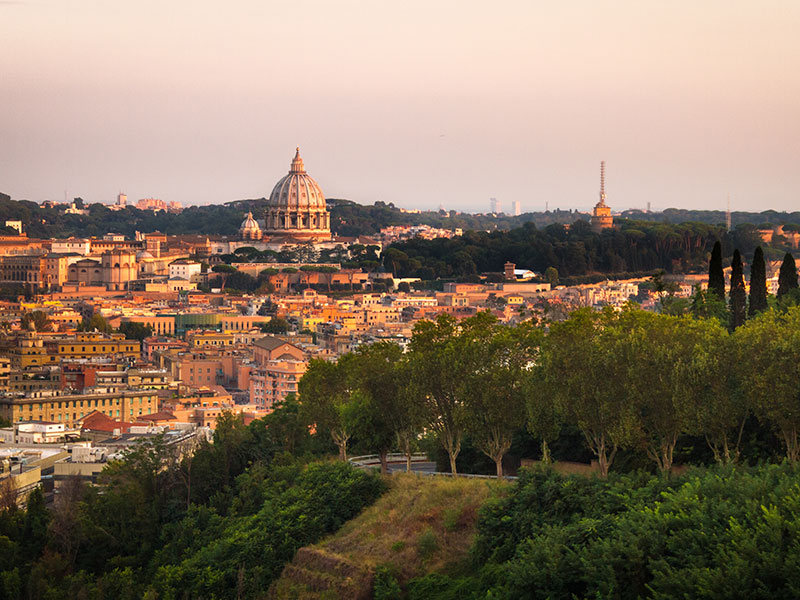 If you’re prepared to work up a bit of a sweat in search of that picture-perfect sunset snap, then you need to don your walking shoes and make the hike up to the top of Monte Mario in northwest Rome. At 139 metres, Monte Mario is the highest hill in the Eternal City (although not a member of the canonical seven). The summit is home to Rome’s observatory on the former site of a 15th-century villa – think Rome’s answer to the Greenwich observatory in London. Make it to the top of the steep cobbled path that snakes its way up the hillside just as dusk is falling, and be rewarded with one of the city’s most unforgettable views. Locals know the panoramic viewing platform as Lo Zodiaco, after the iconic restaurant of the same name that has greeted diners with one of Rome’s most spectacular tables since way back in the golden age of the 1950s Dolce Vita. From here you can see all across the city, as far as the twinkling towns of the Castelli Romani to the south and the distant peaks of the Apennine mountains to the east. Bring your date here, drink in the view and see why the belvedere more than merits its other moniker, Il Vicoletto degli Innamorati – the Lovers’ Path.

How to Get There: Take the A line of the Metro as far as Ottaviano, then change for the 32 bus for 4 stops. Get off at Viale Angelico/Maresciallo Giardino and walk about 5 minutes to the park entrance at the foot of the hill on Via Gomenizza. 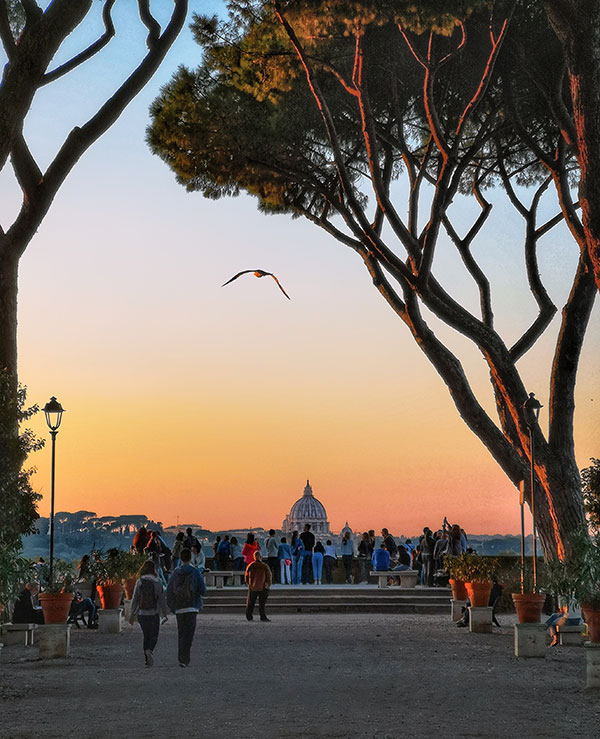 The sight of St. Peter’s basilica looming impossibly large in the distance from across the city framed by the boughs of soaring Roman pines is the stuff that dreams are made of. And yet that’s exactly what lies in store in the Giardino degli Aranci atop Rome’s Aventine hill, a leafy park studded with fragrant orange trees in the shadow of the ancient church of Santa Sabina. At sunset the already spectacular scene is transformed into something straight out of a fairy-tale, when the sky over the Tiber turns a vivid shade of orange to match the fruits hanging from the nearby trees. If that’s not enough, take a stroll just a few metres down the road and you’ll come to the keyhole of the Knights of Malta, where the 18th-century architect Giovanni Battista Piranesi created a spectacular tromp l’oeil illusion in which Michelangelo’s massive dome is perfectly framed in the confines of the tiny keyhole.

How to Get There: The Giardino degli Aranci is an easy walk from the Circo Massimo stop on the B line of the Metro. Alternatively, it’s a short hike up the Aventine hill from the Lungotevere just south of the Bocca della Verità. 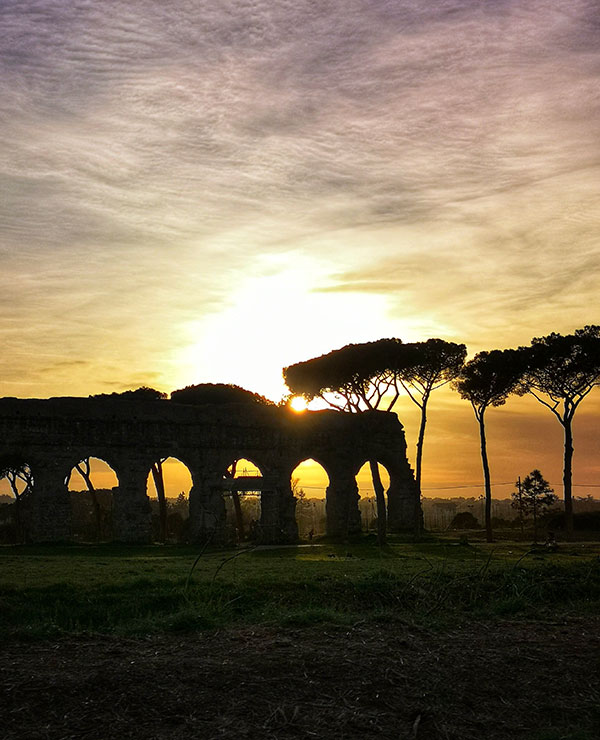 For a sunset pregnant with the memories of centuries past, head to the Parco degli Acquedotti in Rome’s southern outskirts. As the name implies, this incredible park is home to the spectacularly intact remains of some of antiquity’s most awe-inspiring aqueducts; strolling through this idyllic landscape today is like stepping back in time to the Roman campagna as it was thousands of years ago. As the sun makes its march westwards towards the horizon, spectacular shafts of light and colour pierce the endless arches of the aqueducts, painting dramatic ensembles that seem more like the frenzied canvasses of a punch-drunk Impressionist than real life.

How to Get There: Take the A line of the Metro as far as Giulio Agricola. From there it’s a 5 minute walk along the street of the same name to the park entrance. 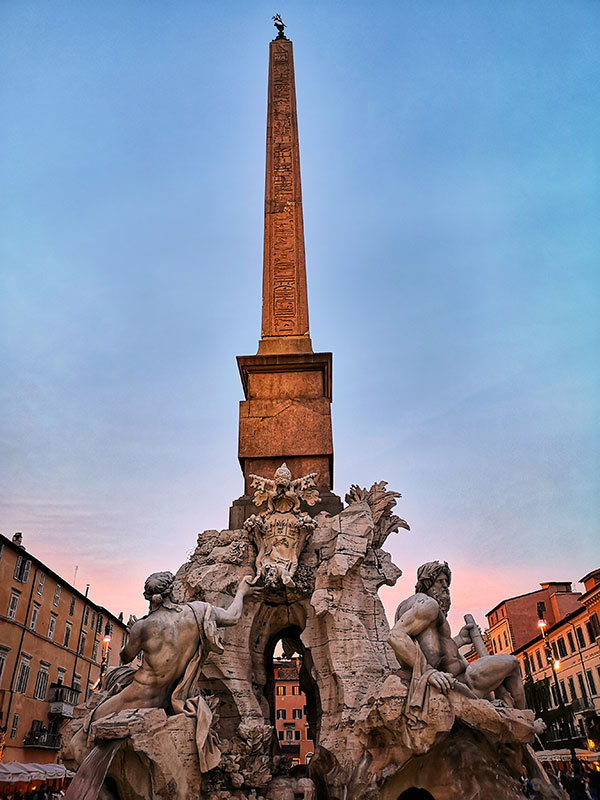 If there is one place in central Rome where you need to watch the sunset, it’s Piazza Navona. An ancient racetrack transformed over the centuries into the Eternal City’s most important public space, this iconic horseshoe-shaped square boasts marvellous fountains, churches and sculptures, dominated by the works of the two great geniuses of the Roman Baroque. The flamboyant undulating church of Sant’Agnese in Agone, designed by Francesco Borromini, and the spectacular Fountain of the Four Rivers crafted by his great rival Gianlorenzo Bernini. In the soft light of dusk the piazza somehow becomes even more enchanting, a mysterious theatre of the Baroque where anything seems possible. This is the time of day our Rome at Twilight walking tour visits the stunning piazza - a great way to experience Rome’s historic centre at its spectacular best!

How to Get There:  Piazza Navona is central Rome’s true beating heart – as you wander through the Eternal City you will inevitably find your way here! 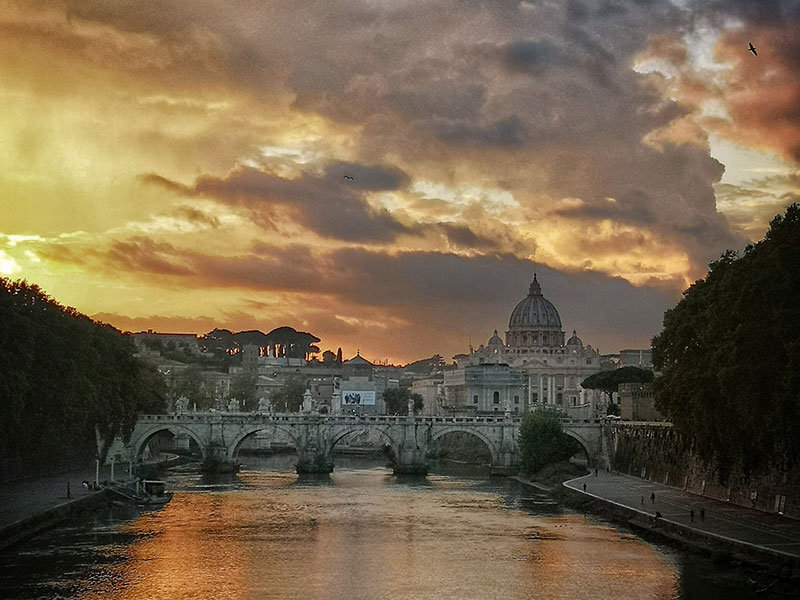 There are few sights in Rome as beautiful as the Tiber at twilight, when the colours of sunset reflect and glint off its glassy waters. Any of the bridges that span its stately flow would make for a great place to watch the sun go down, but our favourite is the Ponte Umberto I. The bridge boasts one of the best views of the Vatican City and St. Peter’s basilica in the entire city, framed by the soaring trees that flank the river and the statue-lined Ponte Sant’Angelo. From here the clouds overhead always seem to take on dramatic patterns and crazy colours as they swirl over Michelangelo’s dome at sunset.

How to Get There: Ponte Umberto is the bridge nearest to Piazza Navona, the next crossing along north of Ponte Sant’Angelo. 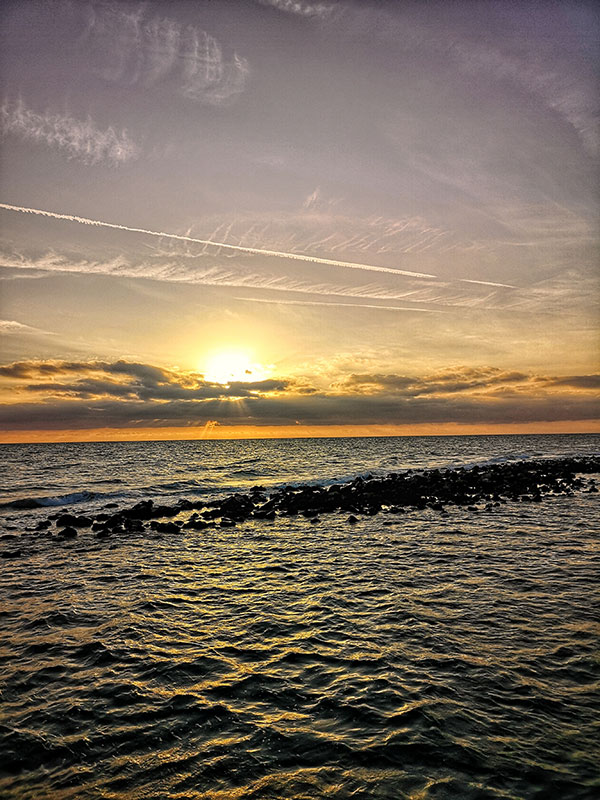 8. The Seafront at Ostia

Rome might technically be a landlocked city, but during its heyday as the ancient world’s most important urban centre it boasted its own port not far from the eastern city limits in Ostia Antica. A visit to Rome's ancient port is a must on any trip to Rome, and Through Eternity offer fascinating Ostia Antica tours led by expert archaeologists. These days the coastline has shifted a few kilometres further to the east, but the seafront at in Ostia’s modern town is easily reached via public transport from downtown Rome. If you fancy gazing over the waters of the Mediterranean at sunset without straying far from the city, then this is where you need to go. From the jetty that spears into the sea in the centre of town, the twilight view is pretty hard to beat as shafts of golden light split the clouds and illuminate the water below and contrails streak across the evening sky. Order some fried seafood and cold white wine to take away from a nearby fish bar and enjoy a sunset that seems a world away from the urban hustle of Rome just 30 minutes inland.

How to Get There: From Rome’s Piramide station (on the B line of the Metro), change for the Ostia light rail line. You don’t have to get a new ticket as your metro ticket is valid for the Ostia line as well. Get off after about 30 minutes at Lido Centro, and aim for the Pontile di Ostia  - about a 15 minute walk.

Through Eternity Tours have been offering award-winning walking tours of Rohttps://www.througheternity.com/en/rome-tours/me for over 20 years. With a range of group and private tours on offer, we’ve got something to suit every traveller. If you want to see the Eternal City at its best, join our expert guides on your next trip!