8 Fascinating Facts About the Colosseum You Might Not Know 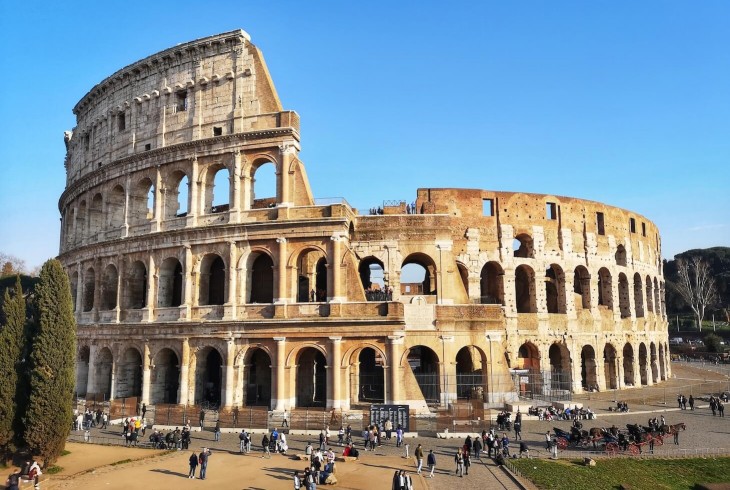 The first time you glimpse the massive ancient arches of the Colosseum rearing into view surrounded by the modern city is simply unforgettable. The largest amphitheatre ever built, this miracle of Roman engineering remains the most immediately recognisable icon of the ancient world nearly two millennia after its construction. Begun in 70AD on the orders of the emperor Vespasian, it was conceived of as a gift to the people of Rome and proof of his generosity. The massive stadium regularly packed crowds of 65,000 people and more into bleachers towering high into the Roman sky to watch the brutal and bloody games unfold. But there’s a lot more to the Colosseum than meets the eye: read on for our countdown of 8 fascinating facts about the iconic amphitheatre that you might not know!

1. You needed a ticket to get in to the Colosseum

Admission to the Colosseum was open to all Roman citizens, and the Games were staged as Imperial gifts to the people. But just like today you still needed a ticket to get in. For the super-organised Romans, an effective ticketing system was vital for crowd-control purposes - perfectly understandable when you consider that the capacity of the amphitheatre was between 60 and 80 thousand people!

And just like today, you needed to get your ticket in advance if you wanted to avoid the lines on the day of the games and guarantee your place. Originally it is likely that broken shards of pottery were used for the job. As time went by, more formalised ivory disks were employed - and these were remarkably similar to the tickets you need to get in to a modern stadium: called tesserae, they indicated your seat-number, tier number and row number, and also indicated which of the 80 gates you had to enter, each marked with a roman numeral incised into the keystone above the gate.

2. Where you sat at the Colosseum depended on who you were

Ancient Rome was a rigidly hierarchical place, and different parts of the amphitheatre were reserved for different strata of society. The primo seats were of course reserved for the Emperor, his family and their guests, who watched the action from their ringside Imperial box, and were often even splattered with blood from the carnage unfolding mere feet away. Enjoying a similar view from their own private box were the Vestal Virgins, one of the big perks of their sacred role.

Next came the podium running around the lowest ring reserved for senators, who reclined on comfortable seats which had their names carved into them. The first and second rings were home to the patrician classes, and as you went higher and higher from here the status of the spectators got lower and lower. The nosebleed-seats up in the gods on the very upper levels of the Colosseum were far from the action and standing room only, but still much more preferable to being out on the arena floor itself or toiling away in the hellish hypogeum below! The ingenious planning of the arena meant that the entire building could be filled or evacuated in a matter of minutes.

3. Like modern stadiums, the Colosseum had a retractable roof

In a truly mind-boggling feat of engineering, Roman engineers succeeded in covering the six acre edifice with an enormous retractable canvas awning to protect spectators from the relentless Italian sun The awning was made out of the same linen or canvas fabric that was used by ancient shipbuilders to fashion sails for their galleys, and the word velarium actually derives from the Latin word for sail.

To operate this complex device, a crack unit of the Roman navy stationed in Naples was deployed during the games to raise and lower the awning, changing its angle as the sun made its way across the sky. From their panoramic perches high up on the amphitheatre’s top tier, the sailors manipulated the infinity of ropes that extended and retracted the unwieldy awning with admirable dexterity – to avoid damaging the velarium, it wasn’t raised at all when high winds or rain was in the offing, leaving the spectators at the mercy of the elements.

For a short period of time after its completion, the Colosseum played host to dramatic sea-battles known as naumachiae. More frequently these bloody war-games were staged in lakes outside the city, such as the massive spectacle put on by the emperor Claudius on Lake Fucinus – this involved 100 warships carrying 19,000 soldiers and rowers, all of whom were expected to kill, be killed or drown.

Under the emperor Titus, contemporary sources record that the arena of battle was relocated to the Colosseum flooded with water specially for the purpose via a complex system of sluice gates, canals and pools. Land animals such as horses and bulls were trained to enter the water and play the role of sea-monsters in the perverse charade. The Colosseum was obviously a tiny space for full-fledged maritime warfare, and the water level would have been extremely shallow; thus, entire fleets of custom-made miniature ships with shallow hulls were constructed to commence battle in what must have resembled a great oversized bathtub.

Given the close-quarters involved these must have been chaotic affairs where it was difficult to tell friend from foe, as oarsmen rowed furiously, archers fired arrows across the bows of opposing ships, and sword-wielding gladiators prepared to board and repel boarders in turn. These spectacles were often historical re-enactments of glorious victories of the Roman navy that ended with bodies floating in seas of blood. When Domitian rose to power he put an end to the sea-battles, constructing the vast underground hypogeum that allowed the games to take on new sophistication with the special effects they engendered.

5. The Colosseum was a hotbed for sexual dalliances

The English word ‘fornication’ comes from the Latin fornix, meaning arch or vaulted space. The arches of the Colosseum was a popular meeting point for couples carrying out illicit trysts, and for prostitutes looking to drum up trade after the games when passions were running high from all the excitement. Fornix thus became ancient slang for a brothel, and this signification survives in our word fornication even today.

6. Every level at the Colosseum was furnished with drinking fountains

Today Rome is scattered with public water fountains that flow cold and clear, a godsend in the summer heat. As it is now, so it was in the Colosseum thousands of years ago. The ancient edifice was furnished with more than 100 fountains fed by a complex hidden network of pipes where Romans could quench their thirst if the heat and excitement of the blood-sport all got a bit too much to handle. The Colosseum boasted public toilets as well – these consisted of rows of seats with holes in them, with a drain of flowing water beneath carrying everything off into a system of sewers that eventually led to a large drain that circled the Colosseum. From there the effluent flowed into Rome’s great sewer, the Cloaca Maxma, and off into the Tiber.

The Colosseum’s floor was covered in a layer of sand that provided a firm foothold for the gladiators, and also absorbed all the blood, urine, faeces and vomit that were the inevitable product of the violent spectacle. The link between the sand and the place of combat lives on to this day with our word ‘arena’ signifying a venue surrounded by seats where sports or other public events take place.

8. What are all those holes in the side of the Colosseum?

The massive holes pockmarking the outer façade of the Colosseum speak to the building’s history after it fell into disuse and decline. Looters hovered up all the precious materials in the amphitheatre’s fabric, including the massive metal clamps that helped keep the building’s various floors together. These clamps would mostly have been melted down and turned into weapons during the Middle Ages. One study estimates that the clamps alone were comprised of 300 tonnes of iron.