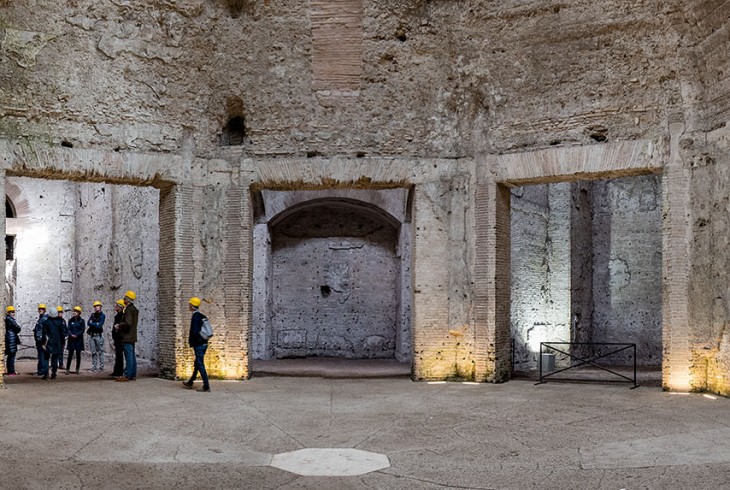 October 13th, 54 AD. The emperor Claudius has just died, assassinated by his own ambitious and ruthless wife (and niece), Agrippina, who served him poisonous mushrooms for dinner.

Nero, the 17 year old son of the “grieving widow,” is proclaimed emperor, in spite of the existence of a legitimate heir to the throne - Britannicus, emperor’s Claudius son.

According to the Roman writer Suetonius, the life of the emperor Nero was nothing but a litany of horrors, from the beginning to the end: from the brutal assassination of his step brother Britannicus, to his suicide in 68 AD, Nero’s biography basically consists of a long list of horrible blood crimes. Suetonius tells us of how Nero had his first wife Octavia killed, and then kicked his pregnant second wife, the beautiful Poppea, to death; he also ordered his teacher Seneca to commit suicide and even meticulously planned the assassination of his own mother Agrippina, who was stabbed in the womb after surviving a first attack.

But, since compiling a list of all the crimes of which Nero is accused would take quite a while, let’s just focus on the most famous one: the fire of Rome.

It’s the night of July 18th, 64 AD: a fire starts in the area of the Circus Maximus and quickly spreads through the city, helped by the wind and also by the many wooden houses in the Suburra, the claustrophobic neighbourhood where the lower social classes lived.

Rome burns for nine interminable days: it’s a an unprecedented tragedy, a catastrophe which has no parallel in the history of the imperial Rome. One third of the city is reduced to ashes, thousands of people have lost their lives, hundreds of thousands have lost their homes: out of the 14 regions of Rome, 10 are burnt to the ground.

Although the causes of the fire could never be identified with certainty, most of the ancient historians blame Nero: as tradition has it, the emperor was happily fiddling whilst he watched Rome burn.

But is that true? Since the fiddle was invented much later, Nero must have played a more ancient instrument, such as the cithara - but in reality, he wasn’t even in Rome, and was staying at his villa in Anzio when he heard the news of the fire. According to ancient historians such as Suetonius and Tacitus, the fire might have actually been started by Nero’s men on his orders, some of whom were apparently seen by many witnesses hurling torches in the streets.

The rumours spread quickly around Rome, and the emperor urgently needed to find a scapegoat: the Christians. Tortured and killed during public shows held in the Circus or used as human torches, the Christians paid with their lives for the fire of Rome: amongst the numerous victims, saints Peter and Paul were martyred during this persecution, sadly the first of a long series.

Fratricide, matricide, uxoricide, arson, religious persecution…The length of the list of Nero’s crimes can be matched only by the list of his extravagances: the emperor was in fact way more interested in shows and chariot races than politics, and even liked entertaining his guests by playing music and singing, or even taking part in sports like racing, which was considered highly inappropriate for an emperor. According to the ancient writers, Nero’s disrespect for the rules of decorum went even further: apparently he even married two of his male slaves.

Is any of this true? Even now, despite all the research that has been done, it’s hard to tell how much truth is in the pages written by the contemporaries of Nero: as they were mostly senators,  the historians of the period often harboured no little hostility towards the emperors - as can be easily deduced from the grotesque portraits of the twelve Caesars that Suetonius depicted in his book.

But whilst historiography cannot offer any reliable evidence about Nero’s personality, archaeology can: Nero’s Golden House. The amazing ruins of Nero’s residence are probably the only evidence that we have that can shed some light on Nero’s character. Aptly named “Domus Aurea”, the Golden House, this incredible residence was built on the land that had been conveniently “cleared” by the fire.

Stretching from the Palatine Hill to the Esquiline Hill, Nero’s House had some remarkable features that might sound impossible even for today’s advanced technology. Not only were the walls covered in marble and the ceilings decorated with golden mosaics, but, among its 300 rooms, the house featured a rotating dining room! Even now it’s not clear what kind of mechanism was used to rotate the room, but its existence is out of question.

The house was also embellished with many gardens studded with fountains and statues. In particular, there is one statue that can give us a good idea of the size of Nero’s ego: the Colossus, a 35 meter high bronze and gold statue portraying the Sun God, but whose face bore the emperor’s unmistakeable likeness.

Close to the Colossus, right where we can now admire the Colosseum (which was built a few years after Nero’s death), the emperor ordered the construction of an artificial lake where he could watch water shows and possibly even naval battles, or just relax while looking at the water of his private pond.

Although a large part of this amazing residence was destroyed, 153 rooms still survive today and have recently reopened to the public after a meticulous restoration. Moreover, thanks to modern Virtual Reality and accurate 3D reconstructions, you can see with your own eyes (and goggles!) the treasures of this unbelievable 1900-year-old palace of wonders, just as it was at the time of Nero.

Join us on our Nero’s Domus Aurea Tour and let yourself be spellbound by this incredible place: after all, there’s no place like...Nero’s Golden House!